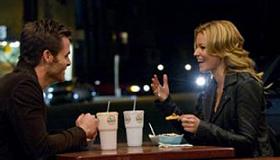 Filling a welcome void in adult-oriented movies, People Like Us lives up to its title as a welcome diversion from all the comic book, superhero, testosterone-driven flicks that have filled summer 2012. This beautifully acted, humane and riveting film follows a troubled young salesman whose late father leaves him $150,000—to give to the sister he never knew he had. Whether the wide release can withstand withering competition from higher profile flicks will be a real test of the grown-up audience's desire to see movies about people like them but this film stands out as one of the year's best. Good word of mouth could give this slow-starter counter-programming a chance at sleeper success.

Based on true events, this dysfunctional family drama centers around the intelligent and ambitious Sam (Chris Pine) whose world is rocked when he learns his record producer father had hidden away his sister Frankie (Elizabeth Banks), the product of an affair, and Frankie's own son Josh (Michael Hall D'Addario). Wanting to keep the secret from his mother Lillian (Michelle Pfeiffer), Sam poses as a new member at Frankie's AA meetings and finds himself deceiving her and Josh by building a relationship based on a lie—or rather, his fear of telling them the truth. For Frankie, a broke and desperate single mother, complications ensue as she finds herself warming up to this mysterious and handsome white knight who wants nothing more than to hang out with her kid and buy them groceries. Meanwhile, Sam also tries to rebuild his own fraught relationship with his mother while holding on to his ever-patient girlfriend Hannah (Olivia Wilde) who cuts her irresponsible manchild a lot of slack.

Director Alex Kurtzman, making his debut after penning a dozen high profile screenplays including Star Trek and Transformers with his longtime writing partner Roberto Orci, based the movie and his script on an incident involving his own family. Indeed, it would seem these tricky and troubled familial relationships are not that uncommon. His work here lends a credibility to events that might have flattened like a soufflé in lesser hands. Kurtzman's use of Los Angeles locations shows off the city to great effect, and he's also helped by a first rate cast led by Pine who shows he has the acting chops to create a complex, interesting, frustrating man. Banks has never been better as a tough, but vulnerable mom still suffering from the indifference of an absent father whose death she had to read about in the paper. As her son, D'Addario is right on the money while Pfeiffer digs into her few scenes with her accustomed professionalism and unparalleled—if underused—talent. Wilde also exhibits a strong screen presence in a largely underwritten girlfriend role.

Intelligent, adult filmmaking at its finest, People Like Us is that rare bird from a major studio: a movie that matters.