close
Ridley Scott goes back to the future 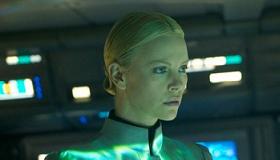 Ridley Scott has only two science fiction films on his resume, but both were massively influential. With Alien in 1979, Scott gave us clean white walls and dark, densely patterned bio-structures, plus a showdown between the kill-or-be-killed ethos of big business and its literal evolutionary equivalent. For Blade Runner three years later, Scott created a crowded, cold, multicultural urban tomorrow that was like today but tripled. Just try to imagine a science fiction film from the last 30 years since that doesn't reference one or both of his looks and themes. Hence the excitement to see Scott refresh his own visions in his return to science fiction with Prometheus. Beneath the hype and promises, however, it's almost a letdown that the actual film is merely very good: a better-than-average 3D big-budget space tale. Seen as such, it's sure to bring in summer audiences eager for smarter-than-usual spectacle, even if it won't inspire the next 30 years of science fiction flicks.

Prometheus starts as academics Shaw (Noomi Rapace) and Holloway (Logan Marshall-Green) link a series of ancient paintings from disparate cultures that all share a common link: a giant pointing at the same constellation. And so, Weyland Industries, headed by patriarch/CEO Peter Weyland (Guy Pearce), packs Shaw, Holloway and a rag-tag mix of scientists and crew on the ship Prometheus and rockets them off an Earth-like moon orbiting one of the constellation's planet. By 2093, they land. And that's when they finally think to ask if the map was an invitation or a warning.

Soon, the crew are exploring the planet's vast and colossal wreckage, which looks like a Pottery Barn version of a Mayan death temple-rustic and spooky with lots of giant carved heads-that also holds a spaceship and petrified alien life forms. As Shaw and Holloway work, other crew members like corporate overseer Vickers (Charlize Theron), rough-and-tumble captain Janek (Idris Elba) and cold, calm helper-droid David (Michael Fassbender, whose sly work is the best thing here) pursue their own agendas.

Any similarities to Alien and Aliens are purely deliberate. You have, in fact, seen all of what's in John Spaihts and Damon Lindelof's script before, but at least you're in the hands of a master, not a studio gun-for-hire like in Fox's last trip to the Alien universe (which involved the depressing modifier vs. Predator). Prometheus is no lame cash-grab fanboy nonsense that plays like the daydreams of a violent 12-year-old, and it's nice to have Sir Ridley classing the neighborhood back up. Scott's more of a visual stylist than a visual storyteller—his Robin Hood failed because you can't shoot rollicking medieval adventure from a helicopter—and the addition of 3D to his tool chest is both welcome and nicely under-done. Still, cynics will argue that filming people in bluish-black outfits against blackish-blue backgrounds hardly screams for the effort and expense of 3D. The special effects are top-notch, even if we're left pondering why the ship Prometheus is more high-tech than Alien's Nostromo, built for 2122.

The interesting thematic questions are all about creation: do we owe our creators obeisance, or defiance? How do we move forward in our present when our past is built on the temples of fallen gods and men? In fact, when we slam into the final act of shouting, shooting and stomach-stretching monster effects, their familiarity is both comforting and confounding. I found myself wishing that the scary stuff had started earlier (so as to not feel rushed) or not at all (so as to not feel tacked-on). But these are idle and subjective complaints, and even if Prometheus just repeats the haunted-house-in-space visceral horrors of Alien, that still puts it ahead of the pack. We live in a dim and dark era when Michael Bay's idiot fantasies of moralistic robot trucks or the simple metaphors of Battle: Los Angeles are considered "science fiction." Let Prometheus be a reminds that a real science-fiction film this superbly-made, smart and satisfying throws off the light and heat of a fire stolen from heaven.