close
Hits us with its best shot 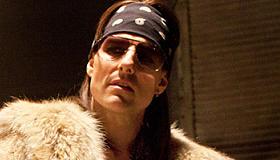 Blending a perfect brew of classic '80s songs, big laughs and rockin' performances, director Adam Shankman manages to make this film adaptation of the hit Broadway jukebox musical a red hot summer blast for people who grew up with glam metal—or just can't escape it on the radio. With a terrific cast and a standout turn from Tom Cruise as a zoned-out rocker, the hokey storyline about a young girl who arrives in Hollywood to make it in the music industry almost doesn't matter. In his hit movie musical Hairspray, Shankman proved he knows his way around this kind of retro-fun material and Rock of Ages shouldn't disappoint fans of the show or the era's music. The killer competition for box office gold this summer makes actually getting people into theatres more problematic, so don't expect Hairspray—style riches. But thanks to Cruise, a respectable run is assured.

The play's paper thin plot is retained by screenwriters Justin Theroux, Chris D' Arienzo and Allen Loeb, who know it really just serves as a thread for the nearly two dozen iconic tunes from Poison, Def Leppard and Bon Jovi that have been tailored for this starry cast of mostly non-singers. Set in 1987, wide-eyed Oklahoman Sherrie Christian (Julianne Hough) gets robbed just seconds after she gets off the bus in Hollywood, and within minutes lands a job in at The Bourbon Room, a Sunset Strip club run by veteran owner Dennis Dupree (Alec Baldwin) and his partner and technical whiz Lonny (Russell Brand). Sherrie soon hooks up with wanna-be rocker Drew Boley (Diego Boneta) who guides her through the beer-soaked pitfalls of working in the joint. Trouble looms for the Bourbon though as the Mayor (Bryan Cranston) and his do-gooder uptight community activist wife (Catherine Zeta Jones) are determined to shut it—and its current headlining act Stacey Jaxx (Cruise)—down.

The film then stirs in Jaxx's sleazy manager (Paul Giamatti), a Rolling Stone reporter writing an expose of the aging rocker (Malin Akerman) and above all, Jaxx himself, perfectly played by Cruise—he not only looks the part, he's surprisingly good at singing it, too. You've never seen Cruise like this—stoned, sexy, topless, reckless—and his swing-for-the-fences performance is so on target it's actually Oscar-worthy. He's particularly good belting at out Bon Jovi's "Wanted Dead Or Alive" and his reported prep of five hours of daily singing lessons has paid off with major dividends as Cruise and his sidekick pet monkey steal their every scene.

The two young attractive leads, Hough and Boneta, acquit themselves nicely and sing capably, but compared to their more colorful co-stars, they tend to fade into the background more than they should. Baldwin and Brand are hilarious together and their "romantic" duet is another show stopper. Giamatti is a real oil slick as the not-to-be-trusted manager while Zeta Jones is over the top but socks home a dynamic "Hit Me With Your Best Shot" accompanied by a chorus of church ladies. It's also nice to see a real singer—Mary J. Blige-—bring home the musical bacon in her film debut.

Aimed squarely at a generation who fondly remembers growing up in the rockin' '80s, Shankman hits them with his best shot, evoking the era, the clothes, the music, and the attitude. If it's not the least bit authentic in a down and dirty way, it's at least highly entertaining.