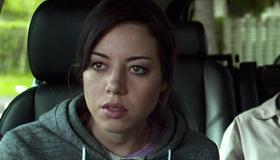 The last decade hasn't suffered from a shortage of Sundance films about quirky 20somethings falling into unlikely love, but Safety Not Guaranteed is, at least in its sci-fi-tinged premise, a more ambitious variant. Magazine intern Darius (Aubrey Plaza) is the usual smart-mouthed, depressed and disaffected young woman, while the surprising object of her slow-growing affection is Kenneth (Mark Duplass), a man who's placed a classified ad seeking a partner for a time travel expedition. The ad the story is based on became a famous Internet meme, and it's not a bad starting point, but the film sadly turns cloying and queasy. Nonetheless, audiences at Sundance ate it up and there's every reason to suppose this will find a modest theatrical audience and lasting cult fanbase.

Ever since her mom's death, Darius has alternated between sarcasm and barely concealed gloom. Smarmy hornball reporter Jeff (Jake M. Johnson) pitches a story for Seattle Magazine to follow up on the eccentric classified, taking Darius and nerdy Indian intern Arnau (Karan Soni) along to track down the writer. At his workplace, spied by Darius, Kenneth's first heard ranting about his unorthodox views on Schrödinger's cat ("it's like I'm the only one who gets it"), with the kind of uncontrolled, delusional vehemence that would prompt most people to distance themselves. The film's attempts to transform him into someone lovable and not-at-all-alarming never gel, forcing a troubling character into a generic, ill-fitting shell of cutesiness.

Jeff approaches Kenneth, pretending to be a time travel candidate, but Kenneth finds his phoniness repellent; naturally his rationale for disliking him is phrased eccentrically. ("Have you ever looked fear in the eye?" is met with "Sure!"). Kenneth's dismissal of the smirking applicant confirms a time-honored cliché: crazy people are always saner than the world around them. Kenneth cottons to Darius, who allows her hard shell to dissolve as she discovers his softer side.

Not sure if you'll enjoy Safety Not Guaranteed? Here's a quick litmus test: how do you feel about watching Mark Duplass, accompanying himself on zither (!), singing a heartfelt song about how "everyone in the big machine tries to break your heart?" Is this a movingly sincere assertion of emotional openness in a cynical world? Or is it just maudlin groaning that expects to be congratulated for repudiating cynicism and distance? Are the two the same? Is Schrödinger's experiment about a box or a cat? Most would say cat but maybe those people haven't "looked fear in the eye."

It's endlessly odd to watch a film in which someone who's mentally disturbed and possibly dangerous turns out to be just another misunderstood soul in a hard world. Johnson's amusingly rabid as a feckless single guy, but a subplot in which he comes to understand true love robs him of his bite and wit. Everyone has to learn a lesson, meaning the potentially fresh elements get ironed out in yet another film about the power of true love and how sincerity is preferable to skepticism. Safety's audacious ending (best left unspoiled, but surely the film's biggest selling point) seems unearned. Tech credits, as they say, are above average.