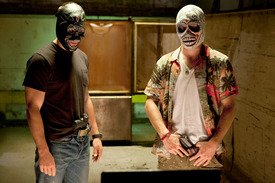 Oliver Stone returns to his comfort zone in this blood-soaked, sex and drug-fueled ride that returns the three-time Oscar winner to territory he mined so successfully in past films from Scarface to Natural Born Killers. Recent projects like his Wall Street sequel or inspirational 9/11 drama World Trade Center might have implied Stone has lost his touch for balls-to-the-wall action dramas. Not so. He almost seems energized by it all—and it works. In fact, Savages is one of Stone's best movies with a ménage et trois love story giving some human dimension to its three young leads, potheads who run a simple, safe weed growing and selling operation. It doesn't stay safe for long: a Mexican drug cartel thinks their talents will be very lucrative for the baddies just south of the border. Call it an offer they can't refuse. Superlative performances from a veteran supporting cast and expert direction by Stone make this the perfect "Stone-r" flick for adults who seek strong, no-holds-barred action without a single superhero in sight. As summer counter-programming, Savages could rack up some nice numbers despite being forced to live in the shadow of Spider-Man and Batman.

Taylor Kitsch and Aaron Johnson play a pair of Laguna Beach pot growers romantically involved—together—with Blake Lively's soulful O, a pure-bred California beach girl they both love and would do anything to protect. That passion comes in handy when a take-no-prisoners Mexican drug cartel chieftain played by Salma Hayek decides these guys are right for her business model and has her henchman Benicio Del Toro kidnap their girlfriend so the boys don't try anything tricky. Things get even more complex when looney DEA agent John Travolta—a crook who's been bought and sold by dealers for years—reluctantly has to play peace-maker. The stakes, and the body count, soar.

What makes Savages work so well is a solid script courtesy of original book author Don Winslow, plus screenwriter Shane Salerno and Stone himself, lest we forget the director won his first Oscar for writing Midnight Express, another drug-laced tale about an unassuming young American forced to use all his wits to survive. Stone also happens to be an exceptional director and the visual palette, breakneck pacing and almost effortless style of the film can be chalked up to decades of experience in turning out this kind of hard-R character-driven thriller. As with a lot of Stone's work, Savages can go way over the top, even pushing into (intentional) comedy, especially in scenes with its most veteran co-stars Hayek, Travolta and Del Toro. The three are all at the top of their game here, completely compelling as they swing for the fences. Hayek in particular gives her villain real gravitas and even a bit of empathy in her tense relationship with her own daughter.

The young lead trio are all very fine. Lively, also the narrator the story, proves she's still one to watch as she transitions for TV to Hollywood, while Johnson (Kick-Ass) is moody and sensitive and Kitsch—who recently had back-to-back starring roles in the bombs Battleship and John Carter—finds redemption here with a tough, no compromise performance that bodes well for his future. Scoring points in brief roles are Emile Hirsch as the money man of our pot dealers and recent Oscar nominee Demian Bichir as another stern cohort of Elena's.

Like it or not, Savages is great screen entertainment: a tough, violent, brutally thrilling movie not to be missed. Oliver Stone is back where he belongs.