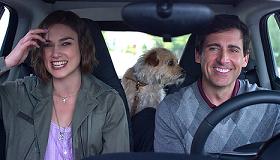 Cinema has long been fascinated with Armageddon, but with technology advancing ever forward, many movies about the end of the Earth overlook true human emotion in favor of big explosions, big gestures, and big box office. However, here writer and director Lorene Scafaria uses our doom as simply the backdrop for a charmingly lo-fi love story in her wordily-titled Seeking a Friend for the End of the World in which she instead focuses squarely on the burgeoning relationship between mismatched maybe-lovers Dodge (Steve Carell) and Penny (Keira Knightley). Despite the film's grim-sounding subject, its star wattage and good humor should appeal to the sort of passionate and mixed audience that get motivated to check out a buzzed-about independent release. Seeking a Friend will benefit from great word of mouth and could last in theaters long enough to go out with a bang, not a whimper.

When the movie opens, the world at large is already well-aware of the 70-mile wide asteroid zinging towards Earth (they've named it Matilda) and, with the quick reveal that the plucky astronauts behind an Armageddon-like scheme to blow it up has failed, the world knows it's doomed. There's no last gasp Hail Mary—that was their last gasp Hail Mary. It's over. Or, at least it will be in three weeks' time. And, while some of the world's inhabitants seem to be having an okay time of it—what with quitting work, drinking and drugging until the sun comes up, having sex with strangers—Dodge is not.

To play Dodge, Carell turns away from his brand of broad, near-slapstick humor and resumes his neurotic straight man with shades of his work in The 40 Year Old Virgin, Dan in Real Life, and even Crazy, Stupid, Love. Our first introduction to Dodge comes on the night of the failed mission announcement and, as he drily comprehends the news, his wife (played by his real life bride, Nancy Carell) literally runs away from him and it. Dodge doesn't balk. He continues to live his life much as he has in the past, even continuing to go into work (one of the film's funniest scenes briefly shows us how Dodge's other co-workers are doing, which is just as not-great as Dodge). But that all changes when Knightley's Penny crawls (literally) into his life.

A shiftless free spirit who has missed her last chance to see her family in England, Penny is unhinged in all the ways that Dodge is not, but the two almost immediately find a connection and comfort with each other. Unlike Penny's idiot boyfriend, played to perfection by Adam Brody, Dodge is as steady as Penny is wild, and the two teeter between expected extremes, desperately and blissfully unaware of just how badly they need to be evened out. Of course, they end up embarking on an indie staple—a road trip!—but Seeking a Friend is so chock-full of lo-fi charm that otherwise unbelievable machinations flow on acceptably. Hey, it's the end of the world and all bets are off.

As Dodge and Penny's individual quests both keep them together and then drive them apart, Seeking a Friend dips into some well-tread territory. Mismatched romances in heightened situations are nothing new, but that's perhaps what makes the film feel so real and human—even with the world's final days ticking away, some things remain: falling in love, taking a trip to the beach, stumbling into an Applebees' knock-off that serves both drugs and mudslides. The film's pluck and sweetness makes it one of the season's most unexpected gems.

It's also Scafaria's directorial debut (she previously penned Nick and Norah's Infinite Playlist), and is a surprisingly bold and assured first feature. While other directors may have backed off from the film's central earth-ending, everyone-dying conceit, Scafaria doesn't. There's some tough stuff at the center of Seeking a Friend, and Scafaria faces truthfully. It is the end of the world—and the result feels just fine.