close
Dancing between authenticity and affectation 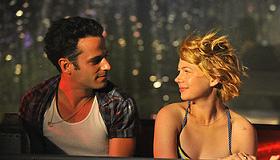 A dissatisfied married woman seeks fulfillment in a neighbor's arms in Take this Waltz, a film set in an idyllic Toronto where real emotion comingles with underlined affectation. Sarah Polley's directorial follow-up to Away From Her similarly concerns the end of an affair, though here the catalyst isn't Alzheimer's but a more general discontent amplified by adulterous opportunity, which for writer Margot (Michelle Williams) comes in the form of rickshaw driver (and closet artist) Daniel (Luke Kirby). Their burgeoning relationship takes place under the nose of Margot's husband Lou (Seth Rogen), a chef working on an all-chicken cookbook. Polley's investigation into the spaces between couples has a gravity that's sobering; this is most true when the filmmaker allows her material to play out free of cutesy touches (like Lou's raining cold water over Margot's shower) that, like too many moments, have a symbolic leadenness that weakens the film's portrait of Margot's struggle to find herself. Strong performances from its leads (as well as from comedian Sarah Silverman, as Margot's alcoholic sister-in-law, Geraldine) and Polley's mature interest in emotional relationships should bolster the film's arthouse prospects, though an A-list cast isn't likely to help this understated indie make much mainstream summer box office noise.

In a flourish far gentler than some that follow (like the pan around Margot and Daniel's apartment that condenses time with superficial gimmickry), shots of Margot fall in and out of focus, conveying her lack of self-definition. Lou, Margot and Daniel's lives are all-play and no-work, marked by hanging out in overly nice homes and quaint urban locales, an unbelievable reality that sporadically interferes with the genuine relationship tensions Polley wishes to explore. Those slowly come to a head as Margot and Daniel begin surreptitiously seeing each other, going out for martinis (over which Daniel describes how he'd seduce Margot) and swimming in a public pool at night, with the latter encounter's dance-like underwater reverie spoiled only when Daniel makes physical contact with Margot. Such incidents have a pent-up intensity more potent because of the contrasting rapport between Margot and Lou, which is strained by sexual discomfort and rife with undercurrents of anger and immaturity that manifests via their jokey habit of proclaiming love for each other in violent cooking terms ("I love you so much I want to mash your face with a potato masher") and Margot's playful and desperate baby talk.

Despite two separate, equally precious sequences involving Lou and Margot on opposite sides of a window, and Margot and Daniel's shared distaste for being "in-between things," Take this Waltz takes a credibly bittersweet attitude toward Margot's search for actualization. Though the film ends on an amusement park ride and a note of tentative hopefulness, there's an enduring feeling that the doubts and insecurities of the preceding material are not gone—Geraldine's climactic admonishment of Margot and a late image of sexual bliss turning into TV-watching, lingers in the air. Williams embodies Margot's inner turmoil with an unfussy sense of terrified instability, and though Rogen and Kirby are solid but unremarkable as the male figures between which Margot must choose, Polley consistently respects, rather than trivializes, her protagonist's quest for personal identity. That pursuit's prime dilemma is most hauntingly conveyed during a shower sequence in which Margot, Geraldine and another woman clean themselves on one side of a gym shower while more mature women congregate on the opposite side—a generational division that subtly speaks to the weighty conversational topic at hand, in which everyone (save for Margot) agrees that "New things get old."