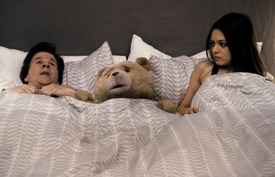 Movies don't get much funnier than Ted, the story of a man-boy (Mark Walhberg) and his beloved childhood teddy bear. But this bear isn't just any bear—he's a magically talking teddy who grows into a woman-chasing, foul-mouthed bad influence. For those fearing the worst, this isn't a sensitive grown man/stuffed animal story like The Beaver, which starred a mental Mel Gibson and a hand-puppet. Instead, Ted sets a new raucous R-rated comedy gold standard. It's hilarious and rollicking fun from Family Guy creator Seth MacFarlane (who also supplies the voice of the title character). Last year, Universal Pictures had great success with Hop, a family film about a talking Easter bunny who befriends a regular guy. On the opposite end of the ratings spectrum, they should enjoy equal success with another talking beast who can spell boffo box office—and may even spur a sequel or two.

The prologue quickly establishes that after an accidental magic wish, young John Bennett's Christmas gift—a cuddly teddy bear, the boy's only friend—manages to come to life, talk, and have feelings just like his new owner. After the initial shock wears off, Ted becomes a media sensation, even appearing with Johnny Carson as a guest on The Tonight Show. ("Yeah, that was a weird appearance," he recalls later, "Ed McMahon kept thinking I was Alf.") As the years go on, John and Ted stay roommates and the novelty of one of them being a talking teddy is largely forgotten. However complications arise when Ted's very presence proves to interfere with John's romance with his girlfriend Lori (Mila Kunis) who is looking for something more serious and bear-less. In other words, she wants the man she loves to grow up, something he himself knows he needs to do when he senses a romantic rival in her slick boss (Joel McHale). As for Ted, in between bringing hookers home to watch TV and having sex with his attractive female co-workers ("I have fired off several letters of complaint about the small penis thing to Hasbro," he gripes), he's also the object of desire for a creep (Giovanni Ribisi) who claims he wants to own Ted for his pudgy son. One result of all this drama: a knockdown, drag-out fight between Ted and John that has to be seen to be believed.

Wahlberg again proves his great comedy chops as he gets laughs while making this whole enterprise believable. It can't be easy working opposite a stuffed co-star, or in this case a special effect masterfully rendered by special effects wizards Judson Bell, Blair Clark and the Tippett Studio. Not only is Ted visually flawless, so is his Borscht Belt vocal work supplied by MacFarlane—his comic instincts as writer/director/teddy bear are right on the money. Kunis is perfectly cast in the understandably frustrated girlfriend role, while Ribisi is blissfully over the top. Plus there's a great extended cameo from forgotten '80s star Sam Jones, whose star turn in Flash Gordon is part of the glue that binds John and Ted together. Audiences beware: this raunchy tear bear flick is stuffed with so many hilarious throwaway lines that you may have to see it more than once.