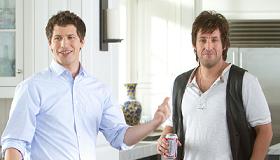 After his recent forays into softer comedy, Adam Sandler reclaims his whimsically raunchy roots in That's My Boy, playing the estranged father of Andy Samberg—as likely an heir to the comedian's audience as anyone—for a flick as heartfelt as it is mindless. But is that audience ready to give Sandler a second shot after November's Jack and Jill didn't even make back its production cost? His return to R-rated territory is a variable risk. It could give him a big hit—but it could also prove it might be time for this papa to think about retirement.

Sandler is a source of endless fascination and frustration. His films sometimes feel like a lifestyle accessory, just a product of going to work each day with his friends and then coming home to his wife and children (all of whom have cameos in That's My Boy) like the regular guy he envisions himself to be. He seems perfectly content not to push himself. Yet, when he's acted for Paul Thomas Anderson, James L. Brooks or Judd Apatow, he's shown deeper reserves of emotion than he ever reveals in his own films. Since Sandler doesn't take directing credits on his films, he makes no claims of deeper authorship or artistic aspirations, as did Jerry Lewis. In fact, unlike the stereotypically depressed comedian, Sandler appears to hide no darkness behind his persona. Underneath his veneer, there just may not be anything much at all.

That's My Boy has the same freewheeling appeal and potty-mouthed, go-for-broke mania of Sandler's earlier comedies. But there's a new undercurrent of energy that's likely the consequence of Sandler separating from his usual collaborators. Instead of David Spade and Rob Schneider, here he teams with Will Forte and Vanilla Ice. And instead of rotating in one of his longtime writers and directors, he's working for the first time with Sean Anders (whose previous film was the teen comedy Sex Drive) from a script by David Caspe, creator of TV's Happy Endings. Even the pre-credits opening, which establishes the engine story of Sandler's underage romance with a teacher, thus spawning Samburg, has a drive usually lacking from Sandler productions.

Yet as with all Sandler comedies, the film is ideologically indefensible, scoring laughs from overweight people, immigrant workers, and homophobia, and taking a rather dismal view toward women in general. (Consequently, Leighton Meester as Samberg's fiancé is woefully underused.) But such complaints seem beside-the-point in a film in which Diff'rent Strokes star Todd Bridges takes a bong hit on ice skates and Vanilla Ice does it with an elderly grandmother. When your goal is to get sloppy, you're likely to make a mess.

The film nevertheless has an unexpected, self-aware wit. Real-life mother and daughter Eva Amurri Martino and Susan Sarandon play the inappropriately amorous teacher in their younger and older incarnations. (Sarandon earned some experience playing a naughty teacher on TV's 30 Rock.) The film even acknowledges its own lackadaisical construction with a joke in which it seems a boom mic is dropped into frame. There is also cheekiness to opening the movie with the Def Leppard tune "Rock of Ages" when That's My Boy is opening directly against the big budget musical Rock of Ages. As simple and direct as vanilla ice cream or a can of American beer, the film marks something of a return to form for Adam Sandler, king of dumb fun. Like a sleeping giant, there is always hope the true Sandman may awaken.