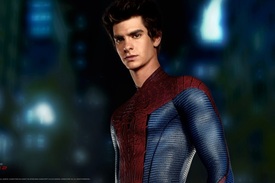 Look up in the sky! It's not a bird nor a plane—on that skyscraper is a teenager in full Spider-Man spandex holding a denim backpack and cellphone and promising his aunt he'll bring home a dozen organic eggs. Meet the new face of superheroes: Marc Webb's totally teenage and totally fun take on the Spider-Man franchise. Bad buzz has haunted this reboot since its announcement as audiences found it a bit premature to stick someone else into Tobey Maguire's tights (get ready, guys—it'll happen to Batman soon enough), but while the studio's decision is a cynical cash-in, the flick itself is a charmer that deserves a chance. Will fans give it one? Enough will to make The Amazing Spider-Man worth the work—but the real test is if it can command its own sequel.

This isn't your grandfath—er—your older brother's Spider-Man, that venerable Sam Raimi classic that hearkens back all the way to 2002. Or really, it is and it isn't. To follow the Spider-Man saga means to live in an ever-looping world where parents are forever vanishing, boys are forever getting bitten by lab experiment arachnids and uncles named Ben are forever starting trouble with the wrong gun-toting thug. Boy meets girl, boy meets spider, spider meets world. The song remains the same—the difference is how the notes are played.

Where the compact Tobey Maguire played Peter Parker as an ambitious bantamweight wrestler who used his powers to try to buy a sports car, Andrew Garfield is lanky and lean with a goofball X-Games energy—he goes straight out to test how his super-skills can improve his skateboarding tricks. Maguire and Garfield were both 27—a long way from 17—when they were cast as Spider-Man, but Garfield has a fidgety youthfulness that makes it hard to believe he'll be 29 by the time this flick leaves theaters. He shuffles, he mumbles, he's cocky. He has an entire awkward scene with Gwen Stacy (Emma Stone) where he never completes a grammatical sentence and still winds up with a date. It's as if his Peter Parker was bitten by a spider and the ghost of James Dean. And weirdly, when he's in full mask and beating up bad guys, his Queens' accent goes radioactive, making him sound like an ass-kicking Andrew Dice Clay.

During filming, much of Garfield's supporting cast admitted they weren't comic book fans and it shows—they play their characters like real people who could have been imported in from a family, cop or high school drama. Martin Sheen and Sally Field's Uncle Ben and Aunt May are solid, blue collar Americans who take their adoptive parental roles seriously. Sheen is palpably frustrated that this boy won't man-up and be responsible, while Field trembles with a silent panic every time Peter Parker comes home mysteriously injured. (Note to parents: if your son comes home sweaty, bloody and starving for cold meatloaf, it's probably not a spider bite—it's bathsalts.) Emma Stone's Gwen Stacy is a smart, cool blonde who knows when to fight, but also listens when her police captain daddy (Denis Leary) orders her to sit in a police car for her own safety. Hey, being a damsel in distress is dumb. And while Rhys Ifans as Dr. Cooper-Peter's father's ex-lab partner and a pioneering scientist in gene-splicing-is fated to become a villain named The Lizard, Ifans plays him as a genuinely benevolent scientist with one painfully obvious motivation: a bright red stump that dangles where his right hand should be. He's dedicated his life to finding out how humans can regenerate limbs as easily as a gecko can regrow its tail, but in the meantime, his amputation pokes out of his button-ups as a reminder of how his science can serve mankind. You can't argue with that—until, of course, his tests go horribly wrong.

The appropriately named director Marc Webb came to Hollywood's attention after ten years of shooting music videos for Good Charlotte, My Chemical Romance and Weezer. He capped off his MTV career with his first film (500) Days of Summer, a $7.5 million twisty romance starring Joseph Gordon-Levitt and Zooey Deschanel. The Amazing Spider-Man is his second movie, and when Sony gave him the keys to their key franchise, they multiplied his last budget by 30 and set him semi-loose. Webb isn't doing anything revolutionary with Spider-Man, but his two passions—youth and love—interest him more than his action set pieces. He'd rather shoot Emma Stone's swoony green eyes than Andrew Garfield throwing a punch, even though he does both just fine.

With the plot a non-issue and the chemistry between real-life couple Stone and Garfield combustible, the last variable in this paint-by-numbers pleasure is the special effects. Which look great with only two fumbling exceptions: Peter Parker's goofy two-fingered handstand and the first appearance of The Lizard, who in pre-transformation looks exactly like a frostbitten lime popsicle. (No worries—he molts into rough scales that look so realistic, you could reach into the 3D to buff your nails.) And several gorgeous setpieces more than make-up for the blunders, best of all Peter Parker's first visit to Dr. Cooper's arachnidome, a blue, rotating whirligig of spiders spinning webs in calm, crafty orbit. When Peter walks into the center of the room and gapes at this eerie biosphere, he has no idea he's standing in the middle of his destiny. We do, but it's his journey—not his destination—that makes this reboot worth the ride.