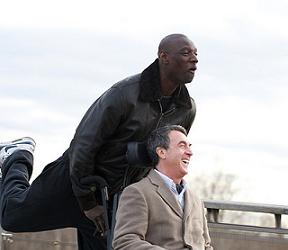 Based on a true story, this glossy French comedy about the friendship between a rich paraplegic and his immigrant caretaker features fewer jokes about frustration, immobility or feeling(s) than you'd expect. What it provides (instead of the thematically clever dialogue of typically subtle French comedy) is biting wit, poignancy and, forsaking some structural nuisances, the summer's best bromance. Omar Sy plays caretaker Driss, and won last year's Caesar (French Oscar) for a performance of such bottomless charisma he trumps the amiable Jean Dujardin (his fellow Caesar nominee and America's Oscar winner). And while that infectious charm sways the story into "Magical Mystical Negro" territory, it's also crucial to lift the drab-factor of a journey about a man with no feeling beneath his neck...but bountiful feelings in his heart. (See what I did there? The movie does better, I promise.) The rapier wit keeps this from careening toward Hallmark generalities and helps the story stay cathartic without stealing any gravity from the perfectly serious issues at hand. Moreover, the bro-bonds are alchemical; feel good movies like this are pretty hard to come by and the laughs are the mortar that seals the bricks. As wide as audiences could be on this one it's not likely to reach them without a marketing campaign to push the right buttons and downplay the extensive subtitling —it's lovable enough to be a huge winner —and up against Avengers and Chernobyl Diaries, it could be a sleeper of surprising power.