close
A striking debut about satisfying the desire to strike 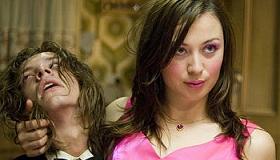 Prom night goes horribly wrong for one would-be swain after he turns down a classmate's invitation to the dance in Aussie filmmaker Sean Byrne's intensely visceral feature-film debut The Loved Ones. Like Carrie without the telekinesis, this horror movie replaces the supernatural with blunt brutality and dark humor to terrific effect. Moviegoers with an aversion to violence will stay away, but genre buffs with a taste for the extreme should ensure healthy ticket sales.

Lola (Robin McLeavy) doesn't stand a chance of getting a date with pretty, troubled Brent (Xavier Samuel, The Twilight Saga: Eclipse). He already has a girlfriend, Holly (Victoria Thaine), and she's the one bright spot for a distressed stoner so overwrought after the death of his father that he's taken to cutting himself. Brent thinks he knows pain, both physical and psychological, but when Lola and her dad (John Brumpton) kidnap him for their own private prom, he is in for quite an education.

What Byrne has done brilliantly here is meld horror to the teen movie. In another film, Lola might be the cute nerd girl who wins the boy from the cheerleader. In this one, she still appears charmingly in her shiny pink dress, cuddling up to her beau on their big night—only he's barely conscious and she's wielding psychotropic drugs and various instruments of torture. She's a black widow spider posing as a teenage girl and in McLeavy's pitch-perfect performance she's a real live wire. If Lola were sane, she would be hard for any boy to handle (especially with her loony tunes old man by her side), but as a psycho, she is an Energizer bunny, relentless in her pursuit of Brent. Brumpton is equally effective as a father whose intentions do not seem to be entirely paternal and who is every bit as cracked as his daughter.

The Loved Ones might have reached perfection if writer/director Byrne had taken a cue from Lola and stopped being so eager to get to prom. A subplot involving another couple's misadventures at the big dance steals intrigue and tension from the goings on in Lola's isolated house. When the filmmaker keeps his focus on Lola and Brent's "date," Byrne shows his mastery of shock, suspense and the well-timed, deeply demented laugh. Remember his name. This striking debut augurs well for the future.