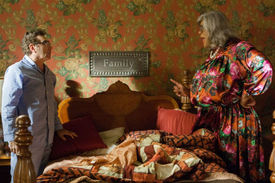 By now, Tyler Perry's movies are so maligned that bashing them seems almost superfluous. But the auteur theory applies equally to celebrated and condemned filmmakers, making Perry one of the most prominent auteurs in contemporary cinema. And for better or worse, Madea's Witness Protection expands on the themes that are so integral to his storytelling style. A broad comedy that marches toward the mainstream further than ever thanks to the casting of, quite frankly, actors white people know (Eugene Levy, Denise Richards, Tom Arnold), Perry's latest is crudely assembled and mostly emotionally unengaging. Nevertheless, Madea's Witness Protection should carve out a small niche at the box office against its higher-profile competition before finding a comfortable afterlife as a home video and VOD staple.

Eugene Levy (American Reunion) plays George Needleman, an accountant at a giant Wall Street investment firm whose days of being a workaholic end unceremoniously when his boss Walter (Tom Arnold) announces that the company has been running a Ponzi scheme and he's fingering George to take the blame. After FBI Agent Brian Simmons (Perry) uncovers a possible connection between George's firm and the mafia, he recruits the frazzled pencil-pusher and his squabbling family to help uncover the evidence needed to make a case. But first, they've got to escape the mob, which means Simmons has to hide the Needlemans at his Aunt Madea's (Perry again). Naturally, the impatient matriarch immediately zeroes in on their personal problems—wife Kate's (Denise Richards) passivity, daughter Cindy's (Danielle Campbell) impertinence—and goes to work tough-loving the hell out of them. Meanwhile, George has to make peace with local pastor's son (Romeo Miller) who lost their church fund to his company's Ponzi scheme and hope the boy can make his money back before he turns to a life of crime.

It's easy—and not altogether inaccurate—to condemn Tyler Perry's movies as stereotype-reinforcing buffoonery. But that misses a lot of the important and remarkably thoughtful ideas that Perry introduces into his films, even if he seems disinterested in them, or may not even be aware that he's making them his focus. Madea's Witness Protection examines Wall Street greed and the trickle-down effect of bad investments, people's ignorance of and hypersensitivity to ethnocentric language, the need for both care and discipline in parent/ child relationships, and perhaps most importantly, personal responsibility in an age of displaced blame and excuse-making.

At the same time, Perry's clumsy and cartoonish storytelling means that, say, Madea's legit advice to Kate that she get "damn mad" at her daughter, for example, pays off in an embarrassing scene where Denise Richards copies her Atlanta drawl in a bizarre speech. And anyways, it's eventually Madea, not Kate, who finally confronts Cindy. A subplot that implies the nebbish George might actually be Madea's half-black nephew is introduced and then completely ignored. And while audiences love to laugh at white people trying to sound "cool," George's incompetent use of hip-hop slang feels more offensive than funny.

The chief problem is Perry's screenplay, whose conflicts operate only on a literal and plain-spoken level. Before characters are even introduced, we're forcefed lines like "...and he's so sick," while the chief reason anyone is forced into action is because someone with more power than them orders, "You figure it out." Despite Madea's admirable insistence that people take responsibility for themselves, Perry doesn't seem to have thought about thematic connections in his own film at any conscious level, and his ham-handed execution undermines storylines of poverty and greed that right now are remarkably universal.

Meanwhile, Levy and Romeo compete to see who can give a worse performance, and the result is a depressing tie. But like the poor actors in a movie by George Lucas, they're mainly guilty of agreeing to recite the lines they're given. Moreover, Perry gives them too much freedom to compete with Madea's grotesque big-boobed exaggerations. Even though she's the movie's marquee attraction, her contributions oddly feel understated after she's asked to play straight woman to Levy's cartoonishly awful impersonation of a Frenchman.

But the precedent for Madea's violent authority is so firmly rooted in early sitcom conventions ("I'm gonna knock the hell out of you" is her "To the Moon, Alice!") that it's not hard to see what people like about these movies. Does that make them good? Not at all. But that doesn't mean they should be disregarded. Perry has a remarkable understanding of racial issues, personal politics, and other cultural preoccupations lingering in the zeitgeist. The problem is that he never consciously works them into his stories, making the potentially deeper resonance of his work an afterthought, if you can even call it a thought at all.

If he could get his funny bone and his brain to work in tandem, Tyler Perry could be truly massive phenomenon—not merely a "cross over" star, but an entertainer with the ability to access and engage the hearts and minds of audiences. Neither well-made nor well-told, Madea's Witness Protection is cinematic junk food at best. But where it most disappoints is how it starts with good, raw materials, and miraculously turns itself into empty calories.