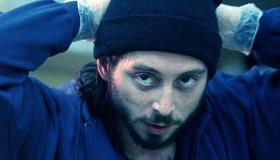 The kinetic first hour gets off to a rousing start with con Jorge (Matias Padin Varela) mounting an improbably successful jailbreak, demonstrating why director Daniel Espinosa was invited to Hollywood to direct Safe House. But as the players and complications pile up, the old lesson that Crimes Doesn't Pay is enervating as ever. While the "Martin Scorsese Presents" credit and the presence of The Killing's Joel Kinnaman might draw some audiences, crossover success is unlikely.

The well-organized pre-credits sequence begins with Jorge and cross cuts without explanation to set up the other players, notably Serbian gang member Mrado (Dragomir Mrsic), his rival and associates. Introduced dead last in a brief shot before the title card is university student J.W. (Kinnaman), and the film takes its time delineating how all its characters relate to each other. This kind of introduce-and-withhold tactic is part of the fun of any good crime movie, and such concealment tactics help obscure how familiar Easy Money is. J.W. himself is an appealing economics major of obscure lower-class stock who drives a cab to make ends meet. In class, a professor lectures about the cause of the global recession. People's expectations for a never-ending financial bonanza, he warns, "were not in keeping with reality. Who will benefit from tragedy?" You can almost see the light bulb going off over J.W.'s head.

A multiplicity of languages—Spanish, Serbian, Swedish and lingua franca English—underline the film's heavy-handed but certainly justifiable subtext. J.W.'s fellow cab drivers are a coked-up lot, and so are the upper-class types he ingratiates himself to: corruption and narcotics are the same above and below. In a society adamant on rejecting fiscal responsibility in pursuit of a quick buck, J.W.'s decision to help the Serbian mob with money laundering makes complete sense. Turning to a bank whose credit has been frozen, J.W.'s offer is cynically accepted by the director, who offers to accept the cash with one condition: "Let the shares drop a bit more."

With J.W.'s rise to illegitimate financial power comes a relationship with wealthy blonde Sophie (Lisa Henni), but his class insecurities aren't alleviated by money. As J.W. cracks up in naive amazement that the cocaine trade sometimes leads to brutal and indiscriminate violence, so does the film: action and a satisfyingly materialistic gloss fall apart so that everyone can brood. Betrayals will occur and loyalties will be tested, but it's the audience that ends up ripped off.