close
The tears of a clown

Katy Perry: Part of Me 3D 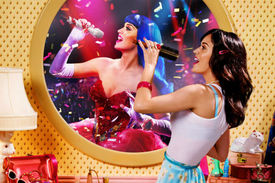 From her breakthrough hit, "I Kissed A Girl," to her unprecedented feat of being the first female solo artist with five #1 singles from the same album, Katy Perry has spun success from a sleek air of earnest fakery. She winks about being dumb while having fun acting like an overgrown sexy kid. This 3D tour documentary Katy Perry: Part of Me slightly pulls back the curtain—there are unguarded tears regarding the breakup of her marriage to comedian Russell Brand—while further burnishing her wholesomely voluptuous image, wide-eyed and low-cut. Created by the same production company as last year's Justin Bieber: Never Say Never, Part Of Me is another low-cost effort that should easily make its money back at the box office, luring in a few curious onlookers while concentrating on hitting the fans' sweet spot.

"How could you ever be too cartoony?" Perry asks early in the film during a costume fitting, which is turns out to be the defining statement she makes in the film. (Her actual first words are "Can I touch it?" referring to, of course, an onstage foam canon.) The film is culled from footage shaped but not shot by directors Dan Cutforth and Jane Lipsitz, and their supposedly honest behind-the-scenes look at Perry's 2011 world tour often feels more like sharp brand management. (Ex-husband pun slightly intended.) The film uses the breakdown of Perry and Brand's marriage as its emotional and narrative hinge, and it is difficult not to empathize with Perry as she earnestly struggles to find "relationship days" amidst her punishing tour schedule. (The pair filed for divorce in December 2011.) One moment, she breaks down crying before a show in Brazil. The next, her tears turn to joy and uplift once she's before the cheering, chanting crowd. The emotions feel real, but they're also so carefully curated (and one-sided) that they lose some of their effect.

Perry has a unique visual fashion style that's one part sugar to two parts latex. She herself never explains the origins of the kittens, cupcakes, rainbows and fruit-flavored fun that she's fashioned for herself, or how the axis of her image is retro pin-up sensuality. While her crew makes references to Alice In Wonderland or Dorothy from The Wizard of Oz as touchstones, Perry's content merely to arrive at a backstage fan meet-and-greet with a hat that looks like an ice-cream cone smooshed upside down on her head.

That's not the only odd omission: though there is a brief on-camera interview with producer and songwriter Glen Ballard, who collaborated with Perry on an early failed project, not even a reference is made to Max Martin or Dr. Luke, who worked with Perry on her actual hits. (Their names appear as producers in the film's opening credits.) And none of Perry's onstage band members or dancers are even mentioned by name—they never even get to speak. Her two managers, however, get plenty of screentime.

The imperative of pop is to appeal to both the smartest and the dumbest person in the room, and at her best Perry nails that with her infectious machine-tooled sound and playfully sexy look. The concert footage is based around highlighting hooks and choruses—a full performance of a song is rare—making the film more a tour document than concert film. There is an undeniable exuberance to Perry's party tunes like "Teenage Dream" and "Firework"—how else could the later be featured in both Madagascar 3 and Jacques Audiard's upcoming Rust And Bone—but Part of Me strains so hard to make Perry seem at once triumphant but totally relatable that it veers toward a self-seriousness you won't find in her music, image or Hershey's Kiss bra.