close
Another kind of “Shakespeare in the Park” 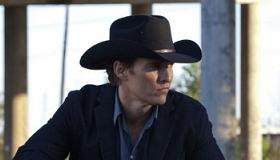 Chris (Emile Hirsh) is as dim as his dad (Thomas Hayden Church) and as conniving as his wicked stepmother (Gina Gershon), which almost explains how he could fall into debt and think calling a hit out on his least favorite family member will fix it. Killer Joe isn't as outlandish in premise as it is in execution, which is saying something. The actors in this trailer park satire realize the stakes; most of them poised for a second renaissance, you can see why they treated this project like a cage match. Gina Gershon (trying to erase her reputation as "that lady from Showgirls") is Sharla, bad mother and worse wife. Thomas Hayden Church (being more than "the guy from Wings") uses his monotone to express love in the form of admittedly useless advice, while Emile Hirsh (not dying of stupidity In the Wild) hires post-surfer/stoner Matthew McConaughey to knock Sharla off. Rising star Juno Temple appears as a saintly pre-sexual sylph: she could be Sharla in a pupal stage, or the oracle at Trailer 52. Mythical flourishes appear in the story as if to satisfy a homework assignment, which perhaps has something to do with the sense that all the oddball, falsely extreme depravity feels as deliberate as it is throwback-y. The excessive dialogue, which playwright Tracy Letts adapted from his play of the same name, recalls the hyper-verbal indie films of the early 90s. It's the second production Letts has shared with veteran William Friedkin, a filmmaker in his own late career renaissance. It's been a while since 1980's Cruising or ‘85's To Live and Die in L.A., the former of which cast a big enough shadow to obscure his previous career defining picture: The Exorcist. Friedkin has survived multiple career nadirs and still manages to lure livewire actors that treat his characters like blank checks on payday. For extreme tastes, I think the greater pleasure is watching these names rise from their undeserved ashes, but most people will come to Killer Joe for the comic violence, fearless white trash lambasting and legendary hijinks involving a fried chicken drumstick.