close
He dreamed her up—but who's really in charge? 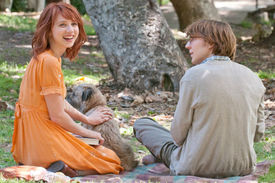 With a tip of the hat to classics like Pygmalion, Frankenstein and even the more recent Ryan Gosling film, Lars and The Real Girl, the directing and producing team plus co-star of Little Miss Sunshine have banded together to create a charming male fantasy comedy with a twist. In Ruby Sparks, Sunshine's Paul Dano plays a creatively blocked writer who conjures up the perfect woman (screenwriter and co-star Zoe Kazan) in his mind and manuscript. But when she comes to flesh and blood life, he gets more than he ever bargained for. This smart and sophisticated romp takes surprising directions as it examines the creative process of writing, the delicate balance of relationships, and the mysteries of men and women. As perfect counter-programming and ideal date night fodder, this romantic dramedy should set off sparks of its own at the specialty box office with a decent chance to cross over to larger audiences starved for something deeper this summer than a 30-page comic book.
.
Dano is a fine, if quirky, actor who's never gotten the chance to strut his stuff as a romantic lead. Thanks to Kazan, the film's writer and his real-life partner, he has a truly three-dimensional, conflicted novelist to play and he totally convinces. Ideally, dreaming up his perfect girl, Ruby Sparks, should not only solve his professional dilemma but also his personal doldrums. Only it all goes quickly downhill when this "figment" of his imagination becomes all too real—despite the initial rush of creating a woman who will do whatever he says, or really, types. And then he has to introduce her to his free-spirited mother (Annette Bening), off-the-reservation stepfather (Antonio Banderas) and disbelieving brother (Chris Messina) who serves as the voice of the audience. As Calvin learns, having everything you think you want doesn't guarantee happiness.

Marking their first film since the Oscar-winning Little Miss Sunshine, married co-directors Jonathan Dayton and Valerie Faris strike a tone between light amusing comedy and darker subtext to make this improbable love story more appealing that it has any right to be. The script by Kazan, the daughter of writers Nicolas Kazan and Robin Swicord and granddaughter of Elia Kazan, is razor sharp and surprisingly credible. Together, she and boyfriend Dano are an irresistible pair. With one real life couple being directed by another, the chemistry clicks. Bening and Banderas are onscreen for just one big extended scene, but make the most of their offbeat characters while Messina manages to steal his every scene with great comic underplaying and flair.

Ruby Sparks is just the right tonic for a summer night at the movies: delightful, enlightening and a great primer on the tug of war between men and women. Just who is controlling who?