close
Dancing for dollars—and they've gladly got mine 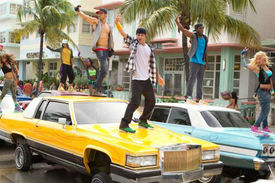 You're stuck in traffic, cars cramming you on all sides, and then: boom. A stereo kicks in, kids leap from their convertibles, and they dance. Apathy has been jolted into action, and while half the commuters think it's a damned nuisance, the other half are electrified. That's the opening number in Step Up's fourth film and it's an apt metaphor for watching the film itself: when the plot motors forward, you're restless, but the second bodies get in motion, you're slammed awake. I'm happy to be stuck in my seat when the legs start flailing—despite swapping out their entire cast, Step Up Revolution has again found some of the most kinetic talents in the country. With the franchise becoming an increasingly successful earner abroad (where it's known as Sexy Dance and where people care even less about the dialogue), it should work up a steady pulse at the box office.

In Florida, everyone's already hot and sweaty, and so Step Up has moved from Manhattan to Miami—and while they're at it, they've switched up the story from dance battles to economics. This new troupe of athletes led by Sean (Ryan Guzman) and Eddy (Misha Gabriel Hamilton) is popping and locking for something bigger than being the baddest break-dancers on the block—they're doing it as public protest to save their block of ramshackle homes and sacred bars from a hotelier who's gotten the mayor's blessing to replace everything with a resort. Well, at least that's their second act goal. At the start, they and their crew The Mob are pulling pranks like the traffic stopper stunt to win a YouTube contest, an ambition at once so big and small that their biggest competition is a singing cat. Along sashays Emily (Kathryn McCormick), a stock character who at this point should just be called "Step Up's Ballerina Brunette," to inject some class in their ass-shaking. We first see Emily at a swanky beach lounge growing impatient with the bartender and hopping the counter to serve herself. Is she a rebel? A thief? Neither: her father (Peter Gallagher) is the tycoon who wants to tear down The Mob's neighborhood. Egads, could this mean trouble?!

Busby Berkeley would have approved of the hijinks director Scott Speer gets up to with his 3D cameras: dancers leap toward the cameras, leap over the cameras, and even bungee at the cameras. A phalanx of business suit-wearing dancers goosestepping down an escalator makes you wonder why Berkeley didn't think of it first, and when they shower the lobby with dollar bills, it's like the second coming of his "We're in the Money" number from Gold Diggers of 1933 with chorus girls scampering about brandishing giant silver dollars. There's a long and forgivably goofy history of mixing politics with prancing, and Speer even acknowledges that it can cross the line—when Eddy breaks out the gas masks and smoke bombs, the troupe revolts.

Despite that ghastliness, Revolution is the prettiest Step Up film yet, shedding some of the street wear for sequences with ruffles and black-lit ballet. Nothing quite captures the magic of Alyson Stoner and Adam G. Sevani's single-take Singing in the Rain homage in Step Up 3D—and can someone please hire Sevani to be the next Gene Kelly—but there's plenty of moments that are pure, breathless performance. Between the four Step Up films, we now have enough dancing that we could scrap all of the stories and salvage the choreography into one glorious supercut: a perfect bit of plotlessness, and something I'd pay to see over and over again.

Tags: Step Up Revolution, Step Up, Step Up 2 the streets, Step Up 3D
Print