close
Anything Wayne can do, Bane can do better 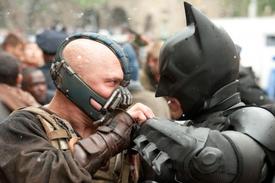 It's a tale of two childhoods: Bruce Wayne, the rich son of justice born in a mansion, and Bane, the poor son of savagery born in the bowels of an underground prison. Wayne and Bane, Bane and Wayne. Call it a nursery rhyme of destinies with one harsh truth: anything Wayne can do, Bane can do better. Batman—the very image of darkness, mystery and strength—has now met a villain who literally grew up in the shadows, uses a mask to survive, and can deck Batman with a punch. Their showdown is a battle between two immovable forces, which makes director Christopher Nolan's trilogy capper revert from the careening mayhem of The Dark Knight back to the gloom of Batman Begins. Expect audience affection to do the same. The Dark Knight Rises is a fine film in a strong summer, but it lacks the spark that made its immediate predecessor a masterpiece. Still, Warner Bros. can expect its box office to make back Bruce Wayne's inheritance many times over.

The Dark Knight Rises picks up eight years after Batman last ran into the night pursued by dogs. Since then, Harvey Dent Day has become a local holiday, crime has nearly vanished, and Gotham's mayor is thinking of firing Commissioner Gordon (Gary Oldman) since a good soldier like him isn't needed in peacetime. That peace won't last long as Bane (Tom Hardy) and his League of Thugs in Puffy Jackets have secretly taken over the sewer system where they plot to hold Gotham hostage. As for Bruce Wayne (Christian Bale), he's gone Howard Hughes. Guests at the fancy charity balls where he never makes an appearance whisper that he stores his urine in jars, has grown his nails into eight-inch daggers, and is hiding a disfigurement. That last one is true: nearly a decade after he drop-kicked his public image, Batman now limps with a cane. Years of falling from penthouses have caught up to him—Wayne has lost all the cartilage in his joints, which the rich bachelor explains away to his doctor as the result of "heli-skiing."

But the question the movie asks isn't, "can Batman fight," but "should he?" His longtime butler Alfred (Michael Caine) is convinced he has a suicide-by-supervillain death wish, and it's easy to agree. After the deaths of Dent and Rachel Dawes, Wayne has become fixated on his own misery. The only thing that shocks him awake is jewel thief Selina Kyle (Anne Hathaway), who slips into his manor to steal his fingerprints. To find out why, he has to leave his estate and head into a decadent, self-satisfied city that now thinks he's public enemy number one.

The Dark Knight was fascinated by the line between good and evil. No one knew up from down—especially the camera, which Nolan continually turned on its head so that people dangling from the air appeared to be standing on the ground. Here, he's interested in the descent of civilization and the ascent of individual heroes, and his camera is forever panning up or down as someone climbs or falls. Visually, The Dark Knight Rises looks inspired by a thrilling game of Chutes and Ladders. Thematically, it's about the trickle-down drop from the haves and to the have-nots. (No, Nolan's not siding with Occupy Wall Street—his hero is still the rich guy.) On a small scale, economic inequality is Catwoman's excuse for robbing the rich. On a havoc-inducing scale, it's Bane's battle cry to bring the Russian Revolution to the streets of Gotham.

Rises itself is small scale. The Dark Knight was a roller coaster that sped to an action climax every 20 minutes. Often, it'd even impatiently cross-cut between two nail-biters, like Batman's race to rescue Rachel and the Joker's explosive jailbreak, or the onboard drama of the bomb-laden ships and a SWAT team fumbling a hostage rescue. The audience was tricked and misled as often as were Gotham's finest. But here, the showdown between Bane and Batman looms large, and everything in the film marches towards it. There are no fake-outs, no games, not even a 50/50 Harvey Dent coin flip. It's grand-scale drama, a mandated epic, but one lacking the churning tension that powered The Dark Knight. Though Rises never even once mentions the Joker's name, his absence is felt on every frame.

As our new main villain, Bane is solid, if not legendary, though it's nifty how the sound mixers have made his oddly accented voice rumble from every corner of the theater like the audience is inside a snowglobe ruled by a demonic Santa Claus. Since Rises has only a few show-stopping action setpieces, what looks best in IMAX is the way Tom Hardy's powerful shoulders fill the frame, either when shot from behind as he muscles through people like a sledgehammer, or from the front as he struts forward clutching his collar like a farmer surveying his fields. On Bane's command, his own men die smiling, and though we get to see Hardy's pretty mouth only once, his eyes are charismatic enough to believe people fall under his sway.

As for Hathaway's Catwoman, her first words in the film are "You're the boss," but it takes all of five minutes to realize she's no submissive sucker. Compared to Batman's sacrificial sadness, she's pure self-interest—neither bad nor good, just greedy. Despite straining against a painfully small corset, Hathaway is fine in the role. Her ass looks good in spandex, but what's better are her visible brains, especially when she pretends to be a hysterical chick in order to flee a crime scene without suspicion. Alas, when Batman finally gets lucky on a bear skin rug—his first hook-up in this sexless franchise—it's not with her.

Nolan's Batman trilogy is Hollywood's darkest comic book series, but also its most hopeful. What's key is that Nolan believes in people as much as in superheroes. In The Avengers, the fate of the human race was beyond mankind's control—Earth was to be destroyed because one Norse God was angry at his Norse God brother, and we Earthlings couldn't do a thing about it except trust in six superhumans. But in The Dark Knight, the Joker forever tried to prove that people would eagerly kill each other to survive, and in nearly every case he was wrong. While Batman was the star, the hero was the convict who threw the ferry detonator overboard. The League of Shadows also tried to prove the barbarism of man in Batman Begins, but had to cheat by using a fear toxin. Not until Rises do Gotham's ordinary citizens attack each other sober, yet even as a chunk of the rabble tears the city apart, Nolan shows us that most people choose peace and the bravest among us fight for freedom—whether or not they have Batman by their sides. Regular men like Commissioner Gordon, Lucius Fox (Morgan Freeman) and rookie cop John Blake (Joseph Gordon-Levitt) are just as valiant and valuable to Gotham's future as our weary superhero. And that's good because when the credits roll and we say goodbye to Christian Bale's Batman forever, at least we know mankind can still save the day.