close
A story so improbable, it must be true 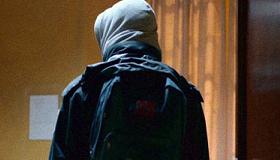 The tragic disappearance of a Texas teen becomes the springboard for a gripping exploration of self-delusion and pathological reinvention in Bart Layton's documentary The Imposter. Taken by itself, the story of how a brown-haired, brown-eyed, 23-year-old French-Algerian convinced everyone he was the blonde-haired, blue-eyed Texas boy who'd vanished three years earlier would be documentary enough. But Layton pushes it many steps further, stylistically and thematically, until he's ensnared us in a tangle of willfully-embraced lies and unsolved mysteries. A true crime tale with added layers of intrigue and atmosphere, The Imposter is poised for better than average documentary business in both theatrical and ancillary.

Layton makes so many risky choices in presenting this material that when almost all of them pay off, you can't imagine the story being told any other way. Early on, we're not only given a fair sense of the crime we're about to see committed, we're brazenly introduced to the man who did it. Frédéric Bourdin, a wily, compelling, self-satisfied little goblin, has impersonated missing children for years. When he stumbled upon the name Nicholas Barkley, he got much more than he bargained for. In 1994, the 13-year old Barkley disappeared from his rural San Antonio home. He was missing for over three years until his family received a call from a Spanish children's shelter claiming Barkley had been found alive in Linares, Spain. The boy they found was actually Bourdin who spun a quick-thinking and ingenious web of lies that convinced Spanish and American authorities that he was Nicholas Barkley. Within days, Barkley's sister, Carey, landed in Spain to take her long lost "brother" home.

It's flabbergasting that Bourdin's ruse got as far as it did. In an interview Layton conducted over the course of two days, Bourdin admits being equally surprised. In Texas, he attended school as Nicholas, incorporated himself into the community and developed a crush on a local girl. Equally arresting is the sad, if oddly understandable, reaction of Nicholas 's family, which is where Layton develops some of his most intriguing ideas. Nicholas's sister Carey wanted so badly to reunite with her missing brother that she was willing to ignore all warning signs, including the fact that Frédéric Bourdin looked nothing like Nicholas Barkley. Everyone bought the lie, including Nicholas's mother and uncle, who Layton also interviews. In a film so dependent upon theatrical reenactments, you'll almost stop breathing when Layton presents actual footage of Bourdin arriving in Texas for the first time. Hooded and clearly nervous, this was the moment of truth, where the family would surely look at this total stranger and realize he looked nothing like their kid. It didn't happen. The family was too willing to believe anything to get Nicholas back, including the high tales of torture and imprisonment used to explain away the discrepancies in appearance between Bourdin and their missing loved one.

Almost everyone here is lying to a degree, sometimes to authorities, sometimes to themselves and, possibly, sometimes to the audience. Beyond the rote facts of the case, the movie's pull comes from the constant questioning of what we're being told by Bourdin and Nicholas' earthy, dim, family. Bourdin claims his crimes stem from a loveless childhood and a desire "to be someone else." Could this plea for sympathy be a true statement? From what we can ascertain, Bourdin's not in it for the money, so maybe it is true. The family, for its part, is equally culpable, even if their wounds are self-inflicted and hurt only themselves. As everyone settles into their comfortable delusions, we realize that what also keeps us off-balance is the film's lack of a moral center. Only the introduction of colorful local detective Charlie Parker jolts us back into the notion that Bourdin can't get away with this forever, nor can these strangers fool themselves forever. With Parker, the tale begins winding towards a conclusion that holds one last cruel surprise, a bomb drop that presents a possible reason why the family was so willing to accept Bourdin into their lives.

Benefiting from outstanding contributions by cinematographers Erik Wilson and Lynda Hall, and composer Anne Nikitin, Layton creates a noirish dream state of slickness, shadows and continual disbelief. The dense storytelling, heavy thematic burdens and endlessly conflicting perspectives could have spun The Imposter right off the rails had Layton's hold not been so assured. Bourdin's story, the basis for the lackluster 2010 thriller The Chameleon, has finally been told properly, deepened by Layton into a thought-provoking essay on the lies people tell (and the lies they believe) to feel part of a family. It begs questions about whether it's better to live happily with our deceptions or unhappily with the truth. It even challenges our notion of whom we throw our sympathies and allegiances to when watching a film. Frédéric Bourdin might be a conman, a serial identity thief and an unreliable narrator, but what does it say about the family of Nicholas Barkley that Bourdin is the only person we entirely believe?