close
Space comes to the suburbs for fleeting fun 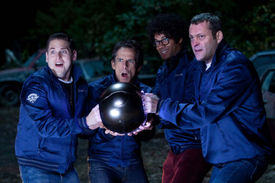 As broad as a barn yet as thin as paper, The Watch is a summertime action-comedy that works almost in spite of its overcrowded cast and loose, pulpy spitball of a plot. Ben Stiller, civic booster and suburbanite, starts a Neighborhood Watch group after the murder of an employee. Alas, the men who volunteer—Vince Vaughn, Jonah Hill and Richard Ayoade—may not share his pure motives. Audiences will be hard-pressed to not enjoy Stiller, Vaughn, Hill and Ayoade just winding up and running and meshing together like gears in a Swiss, uh, you know. Still, it's difficult to imagine the audience remembering anything in The Watch much longer than it takes them to get from the theater to their cars, never mind back safe and sound in their own suburban homes.

Stiller's Evan is a Costco manager and husband hoping for kids and devoted to putting as much into his local community as he and others want to get out of it. Stiller has an easy way with characters like this—stammering uptight strivers who are earnest enough to laugh at but warm enough to like—and it serves him well. His fellow Watch volunteers are Vaughn's motormouthed devoted dad who would like to get out of the house, Hill's sketchy semi-psycho would-be cop who wants to see some action and Ayoade's newly-arrived divorcee who wants to get some action.

Normally the words "action-comedy" imply an excess of the former at the expense of the latter. The Watch not only goes light on the CGI and explosions but also, thankfully, fills the space that might have been devoted just to expensive effects with punchy profanity, earning a hard-"R" rating for foul insults and dirty talk that never soften into mere vulgarity.

Director Akiva Schaffer works from a script variously credited to Jared Stern as well as the writing team of Seth Rogen and Evan Goldberg (Superbad). The plot moves, the supporting cast is lively and the action stays small-scale and intimate, never overwhelming the laughs with effects or shoving science fiction in willy-nilly to shore up the holes in the comedy.

In many ways, The Watch splits the difference between the under-seen Observe and Report (where Seth Rogen's security guard plunges into madness and maleness in mall-land America) and the UK import Attack the Block (where space invaders arrive in an impoverished inner-city British housing flat only to face a multiracial crew of youth toughs). Mind you, it isn't as interesting as either of those films. But it will be far, far more profitable than both of them put together.

Still, when Hill and Vaughn play a variation on "good cop, bad cop" with a skateboarder—or, more accurately, "bad non-cop, worse non-cop"—it's funny stuff. And the way Stiller runs makes it clear that Evan is both a little uptight and a huge Tom Cruise fan. The whole film is like that: offering small pleasures, but well, and with passion. With its foul but never stale breeze of profanity and sex jokes lightly wafting through the film, and a booming pulse provided by the occasional exploded cow, The Watch is as agreeable as it is disposable.