close
A romance of objects 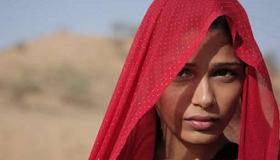 "At last, something beautiful you can truly own." Those are the words with which Mad Men's Don Draper hoped to sell Jaguars to American motorists, a slogan that's less of an advertisement for cars than it is a cold analysis of the dull desire that motivates some men to buy them. There exists an inextricable tension between class and captivity—a dynamic at the bedrock of every financially stratified society in recorded history—the persistence of which affords Thomas Hardy's 1891 novel "Tess of the D'Ubervilles" enduring relevance, and makes it a natural choice of material for Michael Winterbottom's third feature adaptation of his fellow Englishman's work. Trishna transplants Hardy's romantic tragedy from rural Wessex to the decidedly more rural Rajasthan, a clever idea that condemns contemporary India just by virtue of illustrating how cleanly it supports the narrative of Hardy's 18th century novel. Freida Pinto is poised and passive as the eponymous beauty, but her doomed relationship with the dashing Jay (Riz Ahmed), which for most of the film is so impressively attuned to the financial moorings of their love, unravels in such a ludicrous and unmotivated fashion that it retroactively underscores all of Winterbottom's missteps; Trishna's vividly organic cinematography ultimately emerges as the film's only enduring pleasure. Winterbottom's relatively high profile and a strong VOD push from IFC Films should earn Trishna an audience, but it's hard to fathom such dark and mediocre fare emerging as a popular choice amidst the intense summer fray.

Michael Winterbottom is a famously eclectic filmmaker, a prolific journeyman whose tonally scattershot oeuvre is unified by the idea that his movies—which look as if they could have been made by anyone—would never have been made by anyone else. His muse is a wild one (a cursory IMDB search could prove mind-blowing for the uninitiated) but Winterbottom returns to the novels of Thomas Hardy with a consistency that seems at odds with his fastidiously diverse body of work. Having previously adapted "Jude the Obscure" (Jude, 1996) and "The Mayor of Casterbridge," (The Claim, 2000), Winterbottom returns to Hardy for a third time with Trishna, and I'm starting to get the sense that he doesn't seek refuge in the author's novels so much as he appreciates their value as a reliable conduit for his overriding obsessions with sex, class and captivity, a melting pot for his motifs and an anchor for his occasionally dizzying versatility.

Trishna is an idea that Winterbottom has been kicking around since Code 46, waiting for a young Indian actress with the box office appeal required to get such a decidedly glum romantic drama off the ground. Freida Pinto couldn't possibly be more perfect for the part, her radiantly symmetrical face the sort of natural beauty that could befall a girl of any social class, but—to a rich city boy on vacation with his metropolitan bros—would seem wasted on poverty. Trishna is soon put under Jay's employ—he steals sideways glances at her as she brings him his meals (always topped with a Corona)—and the tension between them simmers.

Jay is a handsome man, but Trishna is quietly opportunistic, and Winterbottom takes pains to ensure that the nature of her affection remains ambiguous. She's cagey and coy, Pinto's face never betraying Trishna's true desires, and even once they embark on a fully Westernized relationship in the big city, it remains beguilingly difficult to determine the extent to which Trishna's love for Jay is motivated by self-preservation (Winterbottom's restless camera invites the viewer to constantly reassess the heroine's sincerity). It's a discomforting dynamic, shades of which are evident in all relationships, but Jay's inability to even entertain the question pitches this uneasy story towards full-blown tragedy.

Winterbottom adeptly explores the careful balance between employment and ownership, using one of the world's most pronounced class systems to show the interpersonal effects of such a strictly stratified society. At its best, Trishna unfolds like a literary cross between the work of Luis Buñuel and Ang Lee, but lacking either the ribald anger of the former or the sensual ecstasy of the latter. Winterbottom's decision to eschew the glitzy, romanticized depiction of modern India (favored by other British filmmakers like Danny Boyle and James Ivory) naturalizes the film's abrupt economic shifts, and the first seventy minutes of this over-baked melodrama maintain an enthralling urgency despite awkward pacing, a heap of filler, and a central romance that insists on being improvised at the expense of being rich.

Unfortunately, the shift from Jay and Trishna's halcyon Bombay days to the third act's dusty psycho-sexual violence is calamitously botched—Jay's devolution into a brute is compellingly motivated but far too abrupt, and Winterbottom's inability to engage with the specificity of how Hardy's themes apply to modern India makes the third act feel amusingly ludicrous, rather than fated. We understand that Trishna's behavior is being provoked by certain cultural mores, but Winterbottom only paints with the broadest of strokes, and Trishna ultimately feels like less of a victim than she does a fool, as the film mistakenly trusts that the audience appreciates the extent to which Trishna's hand is forced.

The film's final silliness casts a pall over all of its previous successes, Winterbottom's reasonably elegant dialectic between the ache of modernism and the purity of simple living finished off with a grotesquely comical veneer. Trishna strives to be an urgent portrait of how merciless class systems impose an irreconcilable strain on human relations, and Winterbottom fatally misunderstands how best to dramatize that process. But Trishna's most damning failure is also perhaps its most appropriate, as there's only ever one thing to do after learning that something beautiful can't be owned: Destroy it.