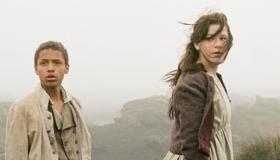 Andrea Arnold's newest testament to passion and squalor strikes a tone somewhere between Cary Fukinaga's emo Jane Eyre and Sophia Coppola's revisionist-hip Marie Antoinette. This Wuthering Heights trades the costumes and customs of a conventional period piece for fleeting sensory experiences. Arnold is less interested in the anthropology of teacups and collars than in the wonder and magnetism Emily Brontë's book. Most will get hung up on the inspired casting of James Howson as Heathcliff; Howson is revelatory and his race is as much a testament to Arnold's class-consciousness as it is a smooth justification for later plot shadings. Precisely what obstacles transform a waif into a man? The answer is equally obvious and undecipherable—and here it's also hot. I couldn't help recalling Tony Richardson's tongue-in- fanny Tom Jones and how surprising it still feels, but that film's self-consciousness bordered stifling. Arnold isn't interested in self-awareness; she wants to be there, to find it, and her lithe camera is a writhing, throbbing part of it all. But all comparisons aside, this film provides a striking and immersive feeling of place and the ache of desire. Critical reactions will be pungent but manifesting a paying audience won't be easy for Oscilloscope Pictures without some marketing magic.

We meet Heathcliff when Catherine's (Shannon Beer) Christian-but-cruel father takes him into their unwelcoming home. Solitary and soaked with rain, Heathcliff's got an intrinsic stoicism that demonstrates how this semi-civilized England has fashioned him into an island; he's unbroken by the era's social conditions, which seem more brutal than the weather. Immediately Catherine's bigoted brother hates him, so it's hard to see the bond between the young almost-lovers as a connection ranking anywhere above pity. Catherine leads him to the hill on the ever-muddy property where they hunt and farm, and she perches for the best view of the valley. His responses are inscrutably silent. The bond is animal in a universe that, outside of that property, is owned by stratifying refinements. When Heathcliff is forcibly baptized, his connection to the elements reads like heathen creed. His vulnerability and embodiment of natural potencies contradict the duplicitous world that half-heartedly adopted him. For a while Catherine takes to Heathcliff's mud-caked barbarity as if her salvation depends on it. When she finds a more socially situated male, his intentions are made clear and Heathcliff's lack of language betrays their bond. Perhaps they never fuck, but their connection was far from chaste.

Like post-adolescent desire, the urges in this Wuthering Heights are overwhelming. For generations of girls who treated the book like erotica, this film offers a lot. Heathcliff is a character of rare manhood—he's a hot cowboy in Elizabethan England—and even the brutes in this world aren't men who own their own destinies. Civilization, it seems, does us very few favors.