close
Conservatives have Dinesh D’Souza. Liberals have Michael Moore. We all lose. 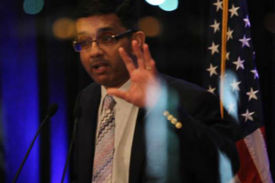 India native and famous conservative pundit Dinesh D'Souza has translated his best-selling book, The Roots of Obama's Rage onto film, and the result is 2016: Obama's America, a manipulative, over-produced political documentary that accomplishes little more than catering to the anti-Obama crowd. Yet, even if 2016 is preaching to the choir, its fanbase is eager to tithe—it's spent this week as Fandango's #1 ticket seller. The Rocky Mountain Pictures release is expanding wide after posting a surprisingly robust location average in limited release. Expect a very strong theatrical run as word spreads in conservative circles.

D'Souza's doc will inevitably be compared to Michael Moore's Fahrenheit 9/11, a film that was released to great fanfare right before George W. Bush was re-elected in 2004. D'Souza employs many of the same questionable techniques as Moore. He uses music that artificially heightens tension, he cuts interviews off after he gets the exact sound bite he needs, and he presents facts in such a rapid-fire manner that it's difficult to stop and ponder their truth. The vilest similarity between D'Souza and Moore is their insistence on milking their humble beginnings to create a public persona. D'Souza's constant references to his youth in India are as self-serving as Moore's frequent exploitation of Flint, Michigan. By the time D'Souza makes a reference to Slumdog Millionaire, even his most fervent supporters will have wearied of his autobiographical myth-making.

Not all of 2016 is a mess—parts of it are nuanced and engaging. In one vaguely bi-partisan section of the film, D'Souza uses footage of Occupy Wall Street protesters to drill home the fact that a lot of liberals are also upset with Obama. And D'Souza should be commended for being slightly more balanced in his approach to understanding Obama than Moore was when probing Bush. Liberals who quickly dismiss D'Souza's contention that predicting Obama's second term means digging into his entire life story should examine their own belief that George W. Bush's policies were influenced by serious daddy issues.

2016's biggest drawback is that it will serve as a great recruiting tool for Mitt Romney—and he didn't have to pay a dime for it. A lot of conservatives and independents will walk out of 2016 thinking that they should vote for anybody but Barack Obama, and that anybody is bound to be Romney. But what does that really accomplish? Someone could just as easily make a similar film that attacks Romney. (No, Newt Gingrich, your movie doesn't count.) And if Romney is elected you can count on Hollywood to do just that.

America's two-party system has created an Us vs. Them mentality that is crippling meaningful political discourse in this country. We're told to pick sides and defend our side unconditionally—and as a result, accountability gets thrown out the window. Instead of being forced to pick from two mediocre choices, voters should be asking why such an increasingly ineffective system has been allowed to grow in the first place. Of course, filmmakers like D'Souza and Moore won't be the ones to ask that question. They both make far too much money exploiting chaos and polarizing an already divided country.