close
A man. A haircut. An epic, disorienting quest. 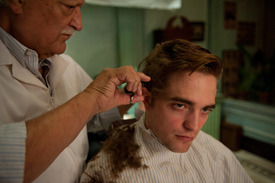 Don't panic, but Robert Pattinson may have been neutered. He still looks like a vampire and behaves like an alien, but in David Cronenberg's Cosmopolis—which the scowling actor carries like a cross—when Pattinson finally gets to uncork all of the sex that the Twilight franchise had him bottle for centuries, he does so with all the damp enthusiasm of a dog humping a fire hydrant at the mercy of his instincts. Pattinson assumes the role of multi-billionaire Eric Packer, the young supernova around which this delirious but pointedly sterile adaptation of Don DeLillo's densest novel tries to maintain its orbit. The brunt of the movie follows Packer as he rides his stretch-limo across Manhattan, braving the worst on-screen traffic this side of Jacques Tati's Playtime in his single-minded quest to obtain the one thing he doesn't already have: a haircut. Stuck in midtown gridlock, Packer bides his travel time by entertaining the parade of acquaintances who pop into his back-seat for a lift, episodic conversations that are punctuated with at least two bouts of sex, and an in-transit prostate exam that almost resolves itself as a milking. He thirsts for human contact like it's going out of style, yet for all of the pleasures available to him, Pattinson refuses to let Packer enjoy them, portraying him as a man who knows what he has but can't understand why he ever wanted it. The film itself is every bit as prickly and disturbed as its hero, but Cosmopolis—which legendary cinematographer Peter Suschitzky (The Empire Strikes Back) renders plastic and strikingly stagey—thrives on its frustrations, resulting in a drifting but occasionally unforgettable portrait of syndromes and systems in a world that wasn't built to accommodate either. It's Cronenberg's most willfully weird movie since Spider, and it should prove a tough sell despite Pattinson's ample star power. But morbid curiosity and seriously perturbed word-of-mouth could fill a few theaters during the dog days.

Eric Packer is a self-made billionaire who doesn't seem to care that his empire is on the brink of imminent collapse—losing all of his money is irrelevant because he's already lost sight of its value. He doesn't seem to care that his sexless marriage is on the brink of decay, because it was something of a sham in the first place. He doesn't seem to care that an assassin has a bullet with his name on it, because as he stares at the "order city" outside his long car windows, none of it seems to add up. Eric Packer just wants a haircut. And not just any haircut, but a haircut that requires a glacial trip from one end of Manhattan to the other, meandering through the streets of the city he wears like a mask, the mess of anarchists who surround his limo displaying all of the bloodthirsty confusion that he's too numb to muster for himself. In the hands of a master like Cronenberg, who enjoys a rare patience for confined spaces and isn't afraid to flatly normalize the grotesque, Packer becomes an unwitting Virgil, his desperate attempts to lead us from the underworld thwarted by bumper-to-bumper traffic.

Cosmopolis is the first film that Cronenberg has written for the screen since 1999's Existenz, though he's happy to preserve DeLillo's nihilistic fortune cookie dialogue (conversations consist of bon mots like "Money has lost its narrative"). Perhaps the most immediately memorable quote comes when one character argues that "Violence is another syndrome—it has no history," a line that directly refutes the title of an especially successful Cronenberg film, and discombobulates even the director's most loyal fans. Cronenberg's vacuum-like sound design and his acute attention to smell should work to further confound audiences, as he constantly alludes to the sensations that viewers can't experience for themselves, physicalizing Packer's detachment from the world at large.

To represent Packer's wild parade of passengers, Cronenberg has assembled a deep cast of instantly recognizable actors (Juliette Binoche, Samantha Morton, Paul Giamatti) who dive into their parts with giddy abandon. They plop into the vehicle's epic sci-fi interior as if summoned from the ether, and they disappear just as quickly—for Packer, everyone is available, but no one is really present. The "chance encounters" he shares with his wife (a perfectly cyborg-like Sarah Gadon) are blithely convenient, but always counter-productive. Packer, as the kidz might say, has seemingly won at life, but his view from the top has allowed him to see that capitalism is an imperfect cure for chaos, a placebo for whatever it is that ails the world. The rich get to live in the future before everyone else, and so Packer (with his fancy toys) has a front-row seat for all of the nonsense that the plebeians have only begun to sniff in the air. It's no wonder that he obsesses over the paintings of Mark Rothko, what with their fuzzy lines and calm swaths of pure color.

And so Cosmopolis rolls along, nudged forward by the velocity of its cynicism rather than the momentum of its plot. The journey is subtly detailed by Howard Shore's brilliant electro score, which maintains a distant human element by squishing Emily Haines' vocals in between the beats. When the film threatens to unravel during a leaden portion of its latter half, Cronenberg punctures the soundtrack with sudden jolts of self-conscious violence in order to get things back on track—by the end of the colossally weird final scene, Cosmopolis almost functions as a much needed meditation on the rampant misuse of guns in a culture that's so eager to damn the present it can't effectively protest the future.

Cosmopolis ultimately plays like Cronenberg riffing on Mike Leigh's Naked, or a contemplative take on Justin Timberlake's In Time, sans the stupidity. All the same, despite the familiarity of its rage, a film this thorny will always be a challenge to embrace, even for its most ardent admirers. Samantha Morton's character repeatedly states that she "understands none of it," and audiences of all stripes will likely murmur in solidarity. Cronenberg's genius is in how he recognizes that confusion is nothing new, and Cosmopolis will endure because he insists that, if shared, it can even be cathartic.