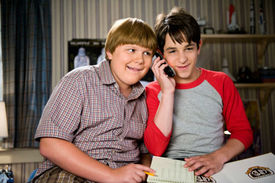 The first two fairly cheap Diary Of A Wimpy Kid films earned a collective domestic gross of over $100 million, so it's no wonder 20th Century Fox wants to keep returning to this well every year. With Diary Of A Wimpy Kid: Dog Days, they could have the most profitable installment yet. This summer finds "wimpy kid" 8th grader Greg Heffley pretending he has a job at the ritzy country club that his best friend Rowley Jefferson's family has joined. Naturally, complications abound. The franchise is a throwback to the live action kid comedies Hollywood used to regularly turn out, a solid formula that makes kids crack up while adults uncover a surprising about of nostalgic yearning. Expect some rich box office action in the dog days of summer 2012.

Author Jeff Kinney originally launched this series as clever and quirky online cartoons for an adult audience, but when they caught on, he quickly turned them into novels, which then became New York Times-ranked bestselling children's books. And then Hollywood, of course, came knocking. The film versions blend in their comic origins by popping in frequent, funny primitive drawings of the characters, but play the rest of the film for smart, heavily slapstick fun. This edition focuses on video game fanatic Greg (Zachary Gordon) wasting away his summer vacation much to the chagrin of his father (Steve Zahn) who tries to get him engaged in other activities. When Greg and BFF Rowley (Robert Capron) discover the good life at Rowley's father's country club, Greg comes up with a scheme to convince his Dad he's working there for the summer break. He also has an ulterior motive—it's a chance to put the moves on pretty classmate Holly (Peyton List), who's there to teach tennis to little kids. Of course, Greg must also deal with big brother Rodrick (Devon Bostick) who decides to freeload in on the action by getting Greg to sneak him into the club every day. And it gets worse: there's an unintended skinny dipping episode.

Fox is smart to keep turning this stuff out before star Gordon grows too old for the role. He's terrific in a Leave it to Beaver way, perfectly capturing the angst of being in-betweener. Chubby Capron is great casting as his awkward friend while Bostick continues to steal his every scene as the slacker brother with rock star ambitions. Zahn makes the most of his befuddled dad while Rachael Harris is a nice balance as a suburban wife and mom. With the help of a consistently funny and inventive screenplay by Maya Forbes and Wallace Woldodarsky, director David Bowers keeps the action rolling along in a tight 94 minutes. Sure, this kid's universe is stuck in a contemporary white suburban world that existed only in the '50s—can they please tweak that in the fourth flick?—but this is still a cool summer treat for the whole family. If you're a fan or just a family looking for a good time at the movies, Dog Days is the funniest and best Wimpy Kid yet.