close
Throats are cut, heads are lost, audiences are blinded 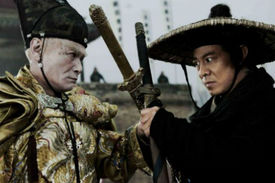 Flying Swords of Dragon Gate, the first Chinese film to be shot in IMAX 3D, is a rare treat for anyone who's ever wondered what a martial arts epic might look like through the eyes of someone suffering from severe glaucoma. Tsui Hark's films aren't famous for their coherence, but Flying Swords of Dragon Gate is such a wantonly incomprehensible experience that it occasionally feels like an epic piece of outsider art. Ostensibly re-imagining one of the wuxia genre's most familiar stories, Hark's latest historical hodgepodge finds Jet Li steering a mess of criminals, courtesans, and one very pissed-off eunuch towards a remote desert outpost which is said to sit atop the Chinese El Dorado. Throats are cut, heads are lost, and hearts are broken over the course of a dizzying two hours, but the real pain is reserved for the audience, as the IMAX 3D experience requires one's eyes to refocus each time they bounce between the images and the subtitles. The story is hardly worth following, but viewers are punished for their impulse to try. As a result, it's exceedingly difficult to enjoy Hark's most handsome and exuberant pageantry, or to appreciate the giddily cartoonish 3D effects facilitated by Avatar guru Chuck Comisky. Genre fans will flock and the film's exclusively IMAX 3D release should bloat receipts above what's typical of a subtitled epic, but Flying Swords is too sadistic an experience to enjoy repeat business.

Tsui Hark has never been fond of realism—the heroes of his films soar on wires with such disregard for gravity that Crouching Tiger, Hidden Dragon comparatively feels like a documentary—but in his best movies, the supernatural acrobatics are kinetic means of expression, Hark defying physics to much the same effect that David Mamet defied punctuation. A creatively waning titan of the Hong Kong film industry, Hark seems to have retained the blood-flow (and splatter) of his iconic early work like Peking Opera Blues and Once Upon a Time in China, but lost touch of the heartbeat. Since coming to the U.S. for a sad stint directing Jean-Claude Van Damme movies in the late '90s, Hark has struggled to regain his form, the international success of 2010's Detective Dee and the Mystery of the Phantom Flame only serving to distract from his diminishing returns.

Flying Swords of Dragon Gate, already a minted hit in China, must have seemed like a surefire way for Hark to get his groove back. A loose sequel to 1992's Hark-scripted New Dragon Gate Inn (itself a remake of King Hu's 1966 classic, Dragon Gate Inn), this latest installment represented an ideal opportunity to use 3D technology to reinvigorate the wuxia genre for a global audience, low on risk and high on gimmicky thrills. And Hark doesn't let a single opportunity go to waste—the opening shot alone soars through more computer-generated objects than Buzz Lightyear does over the course of an entire Toy Story film, and every time there's a chance for excess, Hark somehow finds a way to fit three. He clearly anticipated the effects of the 3D format with a master's foresight, as his rendering of the the Ming Dynasty unfailingly bright and sumptuous, and nearly every composition is designed for depth. Only the most impossible acrobatics look cheap, and even those can be written off for their kitsch appeal.

Of course, the individual shots aren't the problem, so much as what happens when Hark puts them together and expects you to care. Hark's storytelling has less in common with conventional film narratives than it does with parades, as legions of theatrically costumed killers pass by, kept afloat by tons of hot air and street-clearing flotillas of exposition. Flying Swords begins with voiceover narration prattling on about how the city has been divided into two separate bureaus, although the first act finds the film at its most eloquent, as Jet Li and a faction of heroes are introduced alongside a power-mad court eunuch who's determined to find and execute a concubine impregnated by the emperor. It's all relatively coherent until Hark steers his cast to the titular inn, sticks them together in a bland grey cave, and begins stacking subplots as if the characters will build them into a ladder and climb to freedom. Every subtitle requires a jarring effort to refocus, a technological failing that renders Hark's inability to express character through combat as a uniquely painful flaw. (Perhaps Avatar's ugly Papyrus was necessary, after all?)

The non-stop action is lucid but nevertheless as unremarkably choreographed as it is increasingly meaningless, all the generic pathos and swooshing blades melting together as fodder for the biggest sandstorm this side of Ghost Protocol. Kwai Lun-mei's smoldering barbarian warrior is the only hero who doesn't get lost in the shuffle, but her perky presence isn't enough to salvage a booby-trapped finale that deserves to cap a film worth caring about. Flying Swords' ultimate value is in Hark's continuing efforts to punctuate live-action chaos with CG flair, his 101 ways to digitally split arrows in twain enough to school the work of contemporaries like Timur Bekmambetov.

Of course, the most damning fault of Flying Swords is that it will make otherwise reasonable audiences pray for the devilry of dubbing. It's a shame, because wuxia is well-suited for IMAX 3D—it's not as if they're spending millions to reformat the films of Yasujiro Ozu for D-Box, or anything. Unfortunately, Tsui Hark's latest epitomizes a climate in which it's more profitable to be gimmicky than good, and one pleasure always comes at the expense of another. Many of Hark's films are difficult to follow, but in IMAX 3D, Flying Swords of Dragon Gate is the first that's simply hard to watch.

Tags: Crouching Tiger Hidden Dragon, Once Upon a Time in China, Detective Dee and the Mystery of the Phantom Flame, Flying Swords of Dragon Gate, Jet Li, Tsui Hark
Print