close
Gets your motor running 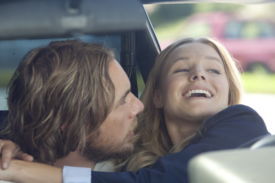 Coming right at the tail end of summer is one of the season's wildest rides. Dax Shepard (TV's Parenthood) stars, writes and co-directs (with David Palmer) this breezy concoction about a guy in witness protection who risks it all to drive his girlfriend to a job interview several hundred miles away. Rising above the average level of this type of car chase genre picture, Hit and Run scores points for deftly marrying comedy and action with likeable leads in the form of Shepard and real life fiancée Kristen Bell to form one of the summer's great escapes—no mean feat in a year that has attempted, but failed, to provide fun, mindless, movie fare. Sleeper potential is strong and if word of mouth is potent, this crafty film's box office stay could develop into much more than a hit and run engagement. At the very least, look for decent business and a healthy afterlife on DVD and cable platforms.

Shepard plays Charlie Bronson, a young oaf who in his previous life as Los Angeleno Yul Perkins saw a crime and has been forced to re-invent himself in a small town's witness relocation program. He's settled in with a very smart girl named Annie (Bell) who suddenly runs into career problems when her ditzy boss (Kristen Chenoweth) at the local community college insists that she go to L.A. to interview for a major academic opportunity at UCLA. Charlie decides to drive her there, which risks big trouble not with the dopey out-of-control federal agent (Tom Arnold) assigned to protect him, but also with the very real chance that he'll run into the gang he betrayed. Said gang is led by a dreadlocked and amusing Bradley Cooper, and when he does in fact get on "Charlie's" trail, and the chase begins. With a pedal-to-the-metal urgency, Shepard's fast-paced sense of fun never wanes and the film's rebel spirit soars as Charlie/Yul tries to outwit the baddies and the feds to get his dream girl to L.A. on time for her big moment.

Although the movie rests on the easygoing and natural chemistry of its two stars (and it certainly helps that they've tried this out in real life), the fine supporting cast adds a lot to the film, particularly a riotous Arnold as the inept agent who can't shoot straight—in more ways than one. As Annie's ex, Michael Rosenbaum has a couple of nice moments and serves as a catalyst for the big chase. But it's Cooper, in a smaller role than most of his films, who really gets to let loose and deliver a wry, yet menacing turn as the lead villain, while Beau Bridges has a brief, but unforgettable, scene as Charlie's brutally unforgiving dad. And in a small bit near the end, Jason Bateman even turns up. Yup, it's that kind of movie. Silly, lighthearted and completely entertaining Hit and Run is a late summer blast of high adrenaline fun.