close
If Streep and Jones don't get Oscar nominations, something is wrong with Oscar 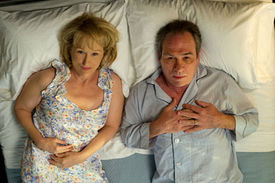 A major studio summer release exploring the sex life of a married couple over the age of 60 is almost unthinkable, yet that's exactly what Sony's winning dramedy Hope Springs is unapologetically about. Of course, it helps to have Meryl Streep and Tommy Lee Jones as that couple,  plus a terrific script that explores what happens when a wife decides her non-existent marital sex life needs a major tune up and forces her extremely reluctant and complacent hubby into a week-long retreat of couples therapy to fix it. Although this may be the very definition of counter-programming, the older audience Hope Springs is aiming for is likely to turn out for Streep and spread good word of mouth, giving this entertaining and provocative film real hope for modest box office success—and maybe even more than that if theater owners give it some breathing room.

On Hollywood's infamous Blacklist of the best unproduced scripts, Vanessa Taylor's look at a long-married wife's attempt to put some spark into her marriage is exactly the sort of thing most studios turn down. But with Streep and Jones, plus Steve Carell as their therapist, this package became too irresistible for Sony, who may now be rewarded with a summer sleeper no one saw coming. Hope Springs is a beautifully acted, funny, touching and fascinating look at relationships and the mysterious divide between men and women. Streep is pure magic and Jones arguably gives the performance of his career here. If they both don't receive Oscar nominations, something is seriously wrong with Oscar.

Kay (Streep) and Arnold (Jones) have been married 30 years without incident, or apparently much excitement. By their own account they haven't even had sex in the last five years and sleep in separate bedrooms because of Arnold's bad back. When Kay hears about a famous couples therapist in a small New England town called Great Hope Springs, she signs them up for a week-long therapeutic course in getting the life back into their lives.  Arnold refuses to go, but against his better judgment he surrenders since it means so much to his wife. Resistant at every turn, Arnold is the kind of guy who doesn't want to rock the boat and would rather watch the Golf Channel than ever analyze what's wrong with his marriage. It becomes a major effort for Dr. Feld (Carell) who gives them lots of homework to renew that spark.

Deftly veering from comedy to drama, director David Frankel (who also guided Streep to one of her 17 Oscar nominations in The Devil Wears Prada) never loses sight of the humanity and universality of the situation. All relationships can hit a roadblock—it's how they overcome it that makes for compelling storytelling. Although Hope Springs is very, very talky, the strong dialogue rings true, especially in the hands of these pros. You expect Streep to be great and she is—she can say more with a look or expression than most actors can with a meaty monologue. Here, she has a scene in a movie theater where she crawls on the floor and tries to orally please her husband. It's a comedy master class, but then she unexpectedly turns it on a dime and breaks your heart. Jones, cantankerous and richly human, is her equal while Carell plays the therapist with deadpan credibility and empathy.

Extraordinary movies as real and grown up as this don't come much from major studios anymore, making Hope Springs a unique treat.