close
This bloody bootlegger drama gets audiences buzzed, but not thrillingly soused 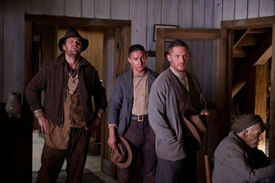 Briskly and brutally adapted from Matt Bondurant's novel about his family's history in Depression-era Virginia, John Hillcoat's Lawless is distilled down to the richest parts of the saga of the bootlegging Bondurants. Filled to the brim with top-shelf performances from an impressive cast, and with enough well-executed (and often shocking) violence to keep moviegoers of all stripes wide awake, Lawless is a minor classic in the making. But minor it will remain, as even with quality ingredients, the film never quite mixes together to deliver a potent brew. However, solid word of mouth out of Cannes and a slew of awards-worthy turns by stars like Shia LaBeouf, Tom Hardy, and Guy Pearce should allow Lawless to do brisk business with educated cinephiles who are hungry for the film's peerless pedigree.

Hillcoat's frequent collaborator Nick Cave (yes, of the Bad Seeds) returns to cleave away at author Matt Bondurant's overstuffed novel, The Wettest County in the World, to shape the generally economical story of Lawless. Bondurant's 2008 historical book was inspired by his own family, and the resulting work is a combination of meticulous research, family mythology, and pure imagination, but one in dire need of a trim in order to make the jump to screen. Cave has wisely excised quite a bit of superfluous material from Bondurant's novel, particularly when it comes to its characters. Gone are the Bondurant boys' father and sister and completely absent is the book's second narrator, a reporter based on real-life stringer Sherwood Anderson. The finished script is a smartly slimmed down take on the material that cuts to the best bits of Bondurant's work: brothers Jack, Forrest, and Howard Bondurant.

The Bondurant boys are big fish in a small pond, hometown boys who don't necessarily make good, but who certainly make some damn good moonshine. While all three of the brothers have enough personality and backstory to fill out their own movie, both Bondurant's novel and Hillcoat's film focus on the clan's youngest, Jack Bondurant (Shia LaBeouf). Being the baby brother to the likely insane and surely emotionally damaged veteran Howard (Jason Clarke) and the burly and nearly-silent string-puller Forrest (Tom Hardy) hasn't resulted in any kind of coddling for skinny Jack, and the elder pair have kept him away from their trade simply because they think he can't cut it. What they don't know is that Jack and his best friend Cricket (Dane DeHaan of Chronicle) have been cooking up their own moonshine, and the pair are desperate to prove themselves by muscling into Forrest and Howard's racket. As Jack comes to power, thanks to his trademark quick/stupid thinking and the unexpected backing of big time gangster Floyd Banner (Gary Oldman), the Bondurants' way of living is threatened by the introduction of crooked Special Deputy Charlie Rakes (Guy Pearce, in his most memorable villain role yet). Along the way, far more than just moonshine gets spilled.

Seemingly unafraid of shocking his audience, Hillcoat's film hints at the violence to come with crisp, white title cards that turn blood-red before we even get to know the Bondurant boys and their brass-knuckled exploits. Like Bondurant's source material and Hillcoat's previous efforts (The Road, The Proposition), Lawless is unnervingly bloody and violent—after all, bootlegging was brutal business. Hillcoat and Cave have, however, ratcheted up the tension of the film to almost unbearable levels, and its final act is one of the most nail-biting (and skin-puncturing) in recent memory.

Most of the film's most shocking violence comes care of Pearce's preening, revolting Special Deputy Rakes, a worthy villain set up in perfect opposition to the Bondurant boys. Pearce's bad intentions are clear before he even opens his mouth—he just needs to step out of a car and survey the scene with his somehow both alert and dead eyes for the audience to know that he's up to no good, and yet Pearce doesn't even turn in the best work in the film. Lawless undoubtedly benefits from its thoroughly top-notch cast (any film that can boast Gary Oldman, Jessica Chastain, and Mia Wasikowska in supporting roles is doing something right), but Pearce's outstanding work is matched by LaBeouf and completely outshined by Hardy's electrifying turn as the grumpy, nearly mute middle brother. Few actors could make the grunting, hulking Forrest work the way that Hardy does, but Hardy has unearthed the soul of the Bondurants' most crucial brother. While "Lawless" is populated by awards-worthy performance, it's Hardy who deserves the bulk of the praise.

Yet, for all its outstanding performances, well-made tension, and precisely crafted scripting, Lawless isn't quite able to hit all of the high notes that it very well should. The emotional core of the film is lacking, and that disconnect makes it difficult to invest fully in the Bondurant boys and their exploits. What works about Lawless may get audiences buzzed, but they'll never feel thrillingly soused.