close
Sure, it's a cartoon—but keep the kids at home 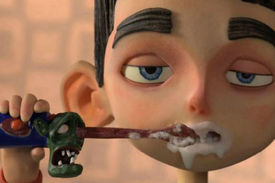 Last decade's It-boy, The Sixth Sense's Haley Joel Osmont, was plagued by dead people. So too is 11-year-old Norman, voiced by this decade's It-boy, Kodi-Smit McPhee (The Road), whose only friends are space-invading ghosts like his deceased grandmother, that suicide down the block, and that squirrel who was just run over by a car. Those are his "people," and other bodies in the world are just that: hostile disbelievers who fuel his social anxieties. Naturally, Norman is obsessed with zombie movies, and now he's starring in one. ParaNorman is easily one of the most charming, imaginative and quirky comedies to come out of Laika Entertainment (Coraline), but for all its cleverness and urbane wit, it's in no way appropriate for kids. Parents identifying with the film's sophisticated humor will be drawn in for more reasons than their children, but once word gets out this adorably wry dark comedy should not be seen by its marketed audience, ParaNorman will have more problems than pesky spirits.

The premise is charming, but flawed: Norman is a pariah who's given up on flesh and blood friends. When he meets the insistently outgoing Neil (Tucker Albrizzi) he rudely drives the cheerful chub away. He's cold because he's used to being treated coldly: everyone at school thinks Norman is weird, and the snot-nosed school bully Alvin (Christopher Mintz-Plasse) beats him up on the regular. Amidst this protracted anti-bullying message, the bigger story is that Norman's Salem-like hometown is beholden to a curse that his kooky uncle (John Goodman, brilliant) keeps at bay. But when his uncle dies (a horrifying scene very wrongly played for laughs) the honor/curse is handed down to Norman, with little to no tutorial. In grand relief, the dangerous ghost (whose backstory would constitute a spoiler) is the villain, and the film's real bully—someone even worse than Alvin—has potent reasons for raising Cain. The real message is forgiveness, but the way it's handled is tedious for adults and too convoluted for kids.

The comedy is truly impressive and Laika's animation is stellar, with some really beautiful metaphors coming out of the play in the literal dust and rags and ashes that make up the characters. Like Rango, the film will have a real and deep niche and likely inspire a dissertation or two. Still, as a summer movie for the kids: protect your progeny. Nightmares and bedwetting are bad. But teaching your kids to take death casually is just bad parenting.