close
You'll dig this Coyote versus Roadrunner sprint through Manhattan 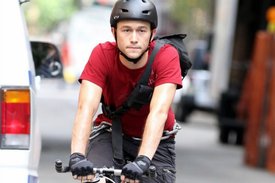 This cartoon-inspired action flick tracks Wilee (Joseph Gordon-Levitt), the Lance Armstrong of Manhattan bike messengers, on a no-brakes sprint to bring a mysteriously valuable scrap of paper to an even more mysterious woman in Chinatown. This simple premise does a fast and fun job showing how every person in this New York is a moving part in a massive machine. While the landmarks and routes get reduced to GPS graphics, the people—particularly Levitt, who's really rocking the action movies—are melodramatic, unique and convincing. But Premium Rush has a rewarding relentlessness and a payoff that suggests that whirring city that surrounds us in is full of supporters who see past the system. Plus, it's about time we had some softcore for ladies who love cyclists. Box office prospects will grow when niche groups find reason to glob on—and they will.

Wilee, as in Coyote, isn't chasing the roadrunner—in a quippy reversal, Wilee's the one being pursued. Even when not being chased, he's chosen a steel-framed bike without brakes because "the bike wants to go fast." His sprint up the island welcomes us to director David Koepp's GPS America, where we can see routes and alternate routes mapped for perspective—add neon and spandex and you might think of Tron. Wilee isn't guided by the talking map—Wilee's in the map—and he pisses off a lot of people as he grazes their cars, whips their hair and reminds them he's more integral to the circulatory system of New York. Today, his biggest enemy is Detective Monday (Michael Shannon), an impulsive gambling addict and blonde Dirk Dastardly with a cartoon villain laugh. Monday has a messy arrangement with a Chinese domino den, but when his debts can't be reconciled, he tries to intercept the valuable envelope Wilee's just been hired to deliver. Unluckily for Monday, Wilee is wily. Smart and expedient, his backstory includes a stint at Columbia Law where he refused to take the Bar when he realized hurdling it meant a lifetime of offices and gray suits. His Houdini-esque escapes from the cops and car crashes are a major part of the Premium Rush's fun—and if anyone ever re-revives Batman, I'll be the first to suggest the boy on a bike.

Wilee's part of a hip subculture that's a community of conscientious objectors-they see the status quo and take their ideals and tattoos elsewhere. Some, like Wilee's girlfriend (Dania Ramirez), work towards a quiet desk job, but even the movers and shakers among the messengers don't fantasize about upward mobility. They're the non-outsourceable life-blood of our major metropolises and it's a working class concept they wear with pride. The messengers' vulnerable working conditions are viewed less as misfortune than a cause for prejudice. They're treated like a public nuisance and jeopardized as a matter of course, but their ranks are firm and fiercely loyal. And as Monday learns, you mess with their crew, you get the bike horn.