close
You may now kill the bride 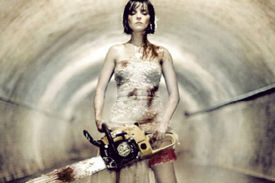 Paco Plaza turns his [REC] franchise on its rotting head with [REC]3: Genesis, switching up the series' blistering first-person-perspective terror for a more conventional, jokey and—much to the film's detriment—self-conscious approach. The opening continues his trademark found-footage gimmick as it details the joyous wedding of Clara (Leticia Dolera) and Koldo (Diego Martín) via characters' video cameras, but the you-are-there aesthetic lingers only until an uncle with a rabid dog bite on his hand transforms into a rabid zombie. That, in turn, initiates an outbreak of undead mayhem of a familiar blood-spurting sort, though Plaza's real twist is having Koldo smash the videographer's equipment, thus shifting the film's visuals to a more Hollywood-slick third-person mode that calls attention to itself with cheeky humor. Alas, similar to The Cabin in the Woods, Plaza's stab at deconstructing genre tropes isn't nearly as clever or as funny as it believes itself to be, and more problematic still, it thoroughly negates any suspense, rolling around in the corpse-strewn muck without a sense of purpose. Aside from drawing in fans of its two superior predecessors, it's difficult to see this inelegant import getting much play at the box office.

It's clear Plaza wants to own up to the illogical artificiality of his point-of-view cam—c'mon, when bodies really start dropping, wouldn't anyone just put down the camera and run? However, not only has the filmmaker grown tired of the signature of his prior works, he also wants to highlight the phoniness of more straightforward horror exercises, using so many overblown audio-visual devices—super-slow-motion during rainstorms, jarring jump scares, look-at-me low-angled compositions and crane shots—that it's as if he's afraid to let a moment pass without reminding viewers what they're watching is fiction. It's a quickly tiresome game, especially as there's little to actually laugh about during this 80-minute zombiefest. Be it a granny cursing at some ghouls or a children's entertainer compelled to combat the forces of evil in a SpongeBob rip-off costume, the script (by Plaza and Luiso Berdejo) strains mightily to poke fun at itself while also delivering the gruesome goods.

With a few notable examples (The Evil Dead, Shaun of the Dead), horror and comedy are generally uneasy bedfellows, and Plaza never concocts a scenario that might simultaneously spook and amuse. Rather, his film is all tongue-in-cheek gore. To be sure, his deliberately flashy direction results in one iconic image—that of Clara remodeling her wedding dress with a chainsaw and striking a figure of badass matrimonial sexiness—and he remains true to his series' mythology in that his zombies are, in fact, demonically possessed, and thus vulnerable to crucifixes and biblical passages. Unfortunately, despite implying with its title that it will reveal the origins of this unholy epidemic, [REC]3: Genesis not only fails to advance its bedrock mythology, but it actively makes fun of it in a way that seems to undercut the series' entire premise. Just as frustrating is that there's simply no meat to these grisly, silly shenanigans, with Plaza so intent on goofing off that even the loyalty, sacrifice and true love that's implicit in his wedding setting winds up buried beneath an avalanche of unadventurous nastiness and moldy meta gags.