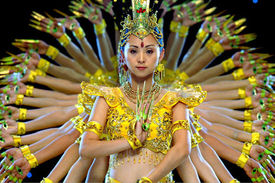 Ron Fricke might have invented YouTube if he weren't too busy marveling at the world to stop and gawk. A mild-mannered camera wizard and the cinema's foremost pioneer of time-lapse photography, Fricke served as cinematographer on Godfrey Reggio's macro-polemical Koyaanisqatsi before he decided to strike out on his own and capture our planet from a somewhat gentler and more awed perspective. Baraka, which Fricke released in 1992 after partnering with producer Mark Magidson, anticipated the post-millennial desire to bounce between a mess of exotic and technologically affected spectacles. Fricke canvassed the globe to stitch together a wordless portrait of Earth, his montage a guided meditation on the interconnectivity of all things (imagine The Tree of Life as commissioned by National Geographic, and you'll be on the right track). In 2007, Fricke and Magidson decided that the time was right for another survey, and so—five years and nearly 30 countries later—we have Samsara, which isn't quite a sequel or update to Baraka as much as a variation on it. A darker and more ambitious meditation on impermanence, Samsara relies on blunt force and unforgettable imagery, overcoming the hazy logic of Fricke's editing to earn your awe. Shot on 70mm and projected on a 4K DCP (no film prints were struck), Samsara is profoundly gorgeous stuff that should pack theaters as it hops across the country like a true event, although it's difficult to dismiss the thought that—logistics be damned—the scale of its images and the scope of its financial potential might have been significantly broadened with IMAX.

Samsara is bookended by footage from the top of India's Thicksey Monastery, nearly 12,000 feet above sea level. Fricke's camera observes as the resident monks painstakingly create an intricate piece of artwork, using millions of colored sand grains instead of paint. When the piece is complete after four days of labor, the monks consider it for a moment—it's stunningly detailed and conceived, worthy of global attention—and then smear it away with their hands, calmly obliterating a treasure that many would hope to preserve forever. This split sequence finds Samsara at its most broad and obvious (so far as wordless, "non-narrative" movies go), but stretches of the film are so unguided that Fricke is wise to frame the montage bluntly enough for even passive audiences to make sense of it by the end. Indeed, Fricke's shots are so varied and majestic that they often overload the senses, their power as images occasionally suffocating their ability to function as anything more.

"Samsara" is an ancient word that Fricke interprets to mean "birth, death, and rebirth," an idea he illustrates during the film's first movement by cutting between shots of King Tut's tomb and an erupting volcano—a man trying to achieve immortality, and the earth endlessly rebuilding itself. A series of baptisms, which Fricke cuts to from shots of the Vatican's formative religious art, succinctly articulates the collision between the ideals of permanence and the nature of decay. The images themselves are forced to compete for their own longevity, as Fricke buries them between less pointed sequences that could appear in any order, in this film or your computer's screen-saver. His crew almost killed themselves to shoot sulfur mines, but the final images whir by only to puncture Samsara's primal momentum.

Samsara is never dull (as if dudes shooting 70mm film from a hot-air balloon over Burma could ever be dull), but like Baraka, it really takes off in its second phase when Fricke kickstarts the remarkable time-lapsed footage, building to a hyper-speed sequence that takes us from the floors of a Chinese meat factory to the walls of Mecca. Thousands of bodies moving in unison, individuality subsumed into sheer numbers. Fricke is the undisputed master of this stuff, and even if the film's first portions aren't cohesive enough to deepen what follows, the core passages of Samsara offer some of the most exhilarating video you will ever see.

Like its predecessor, Samsara pulses with such grandeur and curious intelligence that—even at its most didactic—the film never feels like a sermon. Fricke's focus on Eastern pageantry occasionally (and uncomfortably) recalls the ethnographic films of silent cinema, but Samsara's kaleidoscopic approach and the directness with which Fricke encourages his subjects to interact with the camera mutes any nagging undertones of otherness. On the other hand, the film's God's-eye view approach clashes with Fricke's inability to divorce the montage from his own perspective—he's a thin white American training his camera on the things that fascinate him most, and naturally those tend to reflect a Western background (Samsara's rare glimpses of the United States are limited to the likes of post-Katrina wreckage, the L.A. skyline, and obese citizens chowing down Burger King). The film is far too interested in the infinite to care for the ephemeral political landscape of our age, but Samsara is nevertheless an unmistakably American work, lacking Godfrey Reggio's knack for fostering the illusion of elemental objectivity. Fortunately, Fricke seems somewhat aware of this, confronting the film's human origins with a healthy performative streak. Samsara is peppered with unblinking close-ups of people staring into Fricke's camera, and bisected by a terrifying solo dance that plays like Pina's best deleted scene, as a businessman is violently overwhelmed by his primitive instincts.

Of course, as Samsara eventually returns to those high-altitude monks, the irony takes hold that, in documenting the sand art, their work will be preserved forever. And doesn't his inclusion in a contemporary film confirm that King Tut was on to something? Samsara appeals more to the senses than it does to the intellect, but in colliding against itself, Fricke's montage ultimately argues that life and death are always connected, and that seeing is just another form of rebirth.