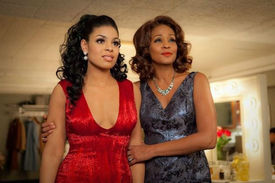 In this song and scandal story about a talented but restless family, the dramas are as enormous as the voices. American Idol winner Jordin Sparks is the quiet star, playing a singer-songwriter with a skill her mother won't call a gift because gifts bring bad omens. The shadow of Whitney Houston's stardom and crushing recent death hang heavy over this midrange movie that promises its female audience at least three good cries during its somewhat overlong run time. Producer and minister T.D. Jakes brings the church into Sparkle as a saving grace, but his tone here is less explicit, more embracing and more meaningful than in his preachy previous flick (Woman Thou Art Loosed, Not Easily Broken). For all its overwrought emotion and awkward plot mechanics, this one makes for a emotional time in the theater.

Whitney Houston plays a mother chewed up and spit out by the music industry, who now keeps a sharp Christian eye over her daughters. Two of her girls work for her in her successful dress shop while the eldest, Tammie (Carmen Ejogo), keeps a cool distance, working at a major department store after she returns home from a bad marriage. Emma (Houston) had Tammie when she was 16, and the grown-up and somewhat neglected daughter is less gifted than her songbird sisters, but far more wily. She's so removed from her family, her siblings call her "Sister" as if to remind her about their relationship. The girls are over 18, but sneak out to sing at clubs around Detroit where the glamor and promise of Motown is being slowly overshadowed by race riots and marches (all of which are only mentioned because this a mostly white-free Detroit).

One day, Tammie sings a song written by her younger sister Sparkle (Sparks), which earns the girls the admiration of Stix (Derek Luke), who hunts them down at church and helps them form a business-savvy group called "Sister and her Sisters." They follow the prominent Motown model, but mix it up with smaller outfits and more vocal heft. Their ascent is a fleet montage that culminates with Tammie finding prosperity and abuse at the hands of a reprehensible comic and the girls struggling to pick up the family pieces, and builds to a somewhat improbable showcase in which Houston speaks support and Sparks sings her heart out. While this remake of Joel Schumacher's 1976 script is more graphic in its portrayal of drug abuse and domestic violence, its clichés are healthfully intact with a tried-and-true arc about how stardom is soul-crushing. And though the acting is thing, the singing is worth soaking up.

Still it's chilling when Houston hollers, "Was my life not enough of a cautionary tale for you?" because you know at both the end of the film and in reality, Whitney must pass the torch to the next generation. Near the end of the film Houston has a church solo, singing "His Eye is On the Sparrow," and in the midst of a performance as spirited as it is scratched by hard living, she croons, "I sing because I'm free," at which point Sparkle feels prescient and pre-ordained. Make no mistake, for all the fans lured in by Houston's last screen performance and women lured in by a career story about female bonds, Sparkle exists as an artifact and beacon, a memorial to and about Whitney Houston.