close
In Costco, no one can hear you scream 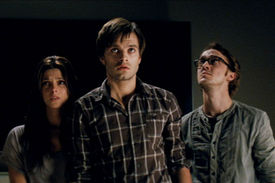 Draco Malfoy keeps making the wrong decisions in supernatural school. In The Apparition, Harry Potter's Tom Felton plays the ringleader of a séance that aims to repeat an infamous 1973 "experiment" using with advanced technology. His group of college copycats comically overdo all the mechanics—heat sensors, EEG readings, brain wave amplifiers—and the effects of their fatal tomfoolery are felt most by a super-hot but ordinary couple living in a borrowed McHome out in the center of a spanking new suburban sprawl. Why would anyone torment them? The answers are inconclusive, but at least writer/director Todd Lincoln's capacity for conventional suspense is great, resulting in squirm, squeal and scream-inducing scares. Ultimately, this release's timing obscures its flaws: it's the last week of summer for most teens and this PG-13 fright fest couldn't be better designed for them—it stars second tier blockbuster idols Felton, Sebastian Stan (Captain America's Bucky) and Ashley Greene (Twilight's Alice Cullen), and it even has a fixation about passing through doorways, which will be cathartic to auds scared of entering new classrooms.

Ben (Stan) hates his job installing home entertainment systems and Kelly (Greene) is a fledgling vet tech with aspirations to be a veterinarian. After work they "visit exotic lands" by way of fast food and hit the Costco for things guaranteed to end up in the garage. But whatever, they're happy, they're a good team and they'll go home to a huge house (Kelly's parents' "Investment home") and play X-Box until they crash. Only on one night, they find mysterious mold on fixtures, hear doors open on their own, and see lights flicker. "Sounds like shoddy construction," says the couple's sole neighbor in the desolate track home community—the point Lincoln's trying to make about suburban sprawl doesn't get clearer as the 82-minute run time ticks on—until Ben finally reveals he was involved in the high-tech refabricating of the 1973 séance experiment, which opened a rift into the spirit world and sucked in some seriously bad stuff. And so to get his angry girlfriend off his back, Ben calls Patrick (Felton), who now gets to perform the smallest, most technologically excessive anti-séance on the books.

In the turn of the century, secular America was fixated on communicating with the beyond. The national obsession was a kind of retreat from the coming of telegraphy, which relied on electricity and wires to connect people, when all a séance needs is a couple candles and human beings willing to hold hands. But even today with the riches of the internet there to help them, these kids still don't know what they're doing—they have curiosity, stolen gadgetry and no sense of consequence. And worse, they're bored. They're about as tied to this event as they are to a grocery run—it's a special event purely because it breaks the monotony.

The soulless-ness of their empty plot of track homes and super-store existence invokes both Poltergeist and Employee of the Month. It's possible Lincoln is indicting these new graduates because they don't "get" the value of owning a home, providing for themselves, or earning a living. Still, killing them with ghosts is an overly harsh harsh life lesson. If Lincoln's horror tropes are just a cover for his anti-suburban screed, how about some solutions instead of a cautionary tale with the added bonus of a semi-naked Ashley Greene? Though he's right about one thing: no one wants to die at Costco.