close
Sets the stage for better and fuller adventures to come 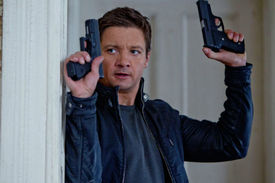 The marketing for Tony Gilroy's The Bourne Legacy doesn't mince words. "There was never just one," it bellows, and it's precisely that premise that powers the screenwriter-turned-director's first helming entry into the Jason Bourne franchise. With Matt Damon's Jason Bourne MIA, Jeremy Renner steps in as Aaron Cross, another super (and super-secret) agent who has been crafted by the CIA's doctors. And while Bourne doesn't appear in this fourth film, his actions color every bit of it—with the CIA reeling from Bourne's exposure of their Operations Blackbriar and Treadstone, they set out to burn every remaining member of their black ops teams, but this Cross won't burn. Weighed down by a muddled first act, a lack of exciting action sequences, and a disconcerting twist to Cross' very existence, The Bourne Legacy doesn't reach the heights of the previous three films, but a guns-blazing final act and strong performances from its entire cast might give it the juice to try for a fifth sequel. Fans of the Damon films will undoubtedly miss their hero, but the film will likely do strong business based on Bourne's brand recognition.

Cross is from the same mold as Bourne—a black ops agent of the highest caliber—but there is one essential difference between the pair that drives the motivations of this latest film. Whereas Bourne was made just from his training, Cross has been pumped up with the CIA's new use of "chems," genetic enhancements to both his mind and body. (And they must work as Cross admits when he was enlisted in the Army, his IQ was 15 points below the minimum.) When we first meet Cross, he's trekking across the Alaskan wilderness, alone with only his wits and his meds to push him on in ways that increasingly read as super-human. On the other side of the country, the problems left in the wake of Jason Bourne's takedown of Blackbriar and Treadstone have Edward Norton's Eric Byer, determined to evaluate and destroy the damage, and the desperation of the CIA mingles not only with Cross, but with Dr. Marta Shearing (Rachel Weisz), a scientist who has helped design and monitor "patients" like Cross.

The first act of the film is regrettably long and in dire need of some cutting and tightening—Gilroy is clearly attempting to re-introduce his audience to the Bourne universe, while also allowing them to get to know both the film's heroes and villains. But that leaves the audience confused, bored, and anxious to get things going (and kicking and punching and running). Frequent and frantic cutting between Cross, Shearing, and Byer works against Gilroy's aims—it's difficult to get invested in characters when the film constantly takes us elsewhere, and none of them are as interesting alone as they are together. While that portion of the film exhibits some of Cross' mental capabilities, it's far more focused on exposition over action, and is surprisingly devoid of the tension, tricks, and twists audiences have come to expect from the franchise. And that's quite strange, considering that Cross' quest seems built for action. While Jason Bourne's quest has always been a far more existential one—"Who am I? What am I? Who are they? What are they?"— Cross knows exactly who he is, including some Flowers of Algernon-tinged secrets, and he knows exactly what (and who) he is going up against. So why isn't he burning things down sooner?

Yet, there's no question that the film exists in the Jason Bourne universe. It certainly looks, feels, and operates like a Bourne film, though it's perhaps overly involved with the previous three. Not only does much of the film unravel concurrently with The Bourne Ultimatum, but it shares characters, stories, and actual mentions of Jason Bourne that draw far too much attention away from Cross and his quest. Instead of peppering the film with mentions of stuff that fans of the franchise will appreciate, Gilroy overly seasons the entire thing with Bourne chatter. Even in a moment early in the film, Cross rests at an Alaskan safe house, where he observes a number of names carved into his bunkbed, including Jason Bourne's. Gilroy isn't just content to let his camera wander over it, he insists on zooming in for no reason whatsoever. These mentions of Bourne don't benefit Cross in the slightest—they just make audiences miss their original hero.

And yet The Bourne Legacy does eventually come up with some serious pay-off. After the first act is endured, Gilroy finally unleashes the good guys and the bad guys, moving together all his different parts and people into a suitable spin on the first three films. Clued into what his bosses are planning for him, Cross gets the hell out of Alaska and back into the continental United States on a quest for answers (and those necessary chems). Aligned with a somewhat-willing Marta, the pair embarks on the kind of globe-trotting, blood-pumping adventures the Bourne franchise is known for, marked by a daring jaunt to the Philippines.

Though The Bourne Legacy comes with significantly less action than most fans would like, when Cross is finally let loose, it's solid stuff, the type of full-throttle action the entire film needs more of. Combined with top-tier performances and a universe-expanding plot, The Bourne Legacy may not live up to its predecessors, but it sets the stage for better and fuller adventures to come.