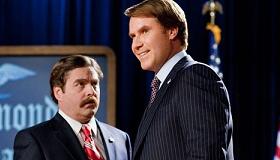 Most American political comedies fail to engage their audience, in part because they contain so little comedy and in part because they contain so little politics. Movies like Welcome to Mooseport, Head of State and Man of the Year put big names in broad comedies, but their laughs come from silly jokes about their stars, not sharp or smart material that's actually about politics. Starring Will Ferrell and Zach Galifianakis as candidates for Congressional election in North Carolina—Ferrell the incumbent, Galifianakis a babe-in-the-woods challenger—The Campaign is an unrepentantly R-rated comedy, but what makes it fascinating is that it dares to name names and call out real problems in its dissection of money-mad modern American politics. Audiences may not be in the mood for the harsher truths in the film, but Ferrell and Galifianakis provide more than enough strange laughs that their sugar helps the bi-partisan bad medicine go down. Think of it as someone making a peanut butter and chocolate swirl of Mad magazine and The New Yorker—two unique tastes making one great treat.

Director Jay Roach is the man who gave us the Austin Powers films and their raucous naughty-bits Cold War spoofery, but he also directed the acclaimed HBO films Recount and Game Change, depicting the real-life events—or, more bluntly, shenanigans—of the 2000 and 2008 Presidential elections. The force driving the plot of The Campaign is, bluntly, the same as the force driving a lot of the 2012 campaign: Money. Will Ferrell plays incumbent Democratic Congressman Cam Brady, a powerful political force with George W. Bush's vocabulary and Tom Brady's hair, who tanks after a sex scandal. The multi-billionaire Motch brothers, Dan Aykroyd and John Lithgow, funnel funds into supporting a rival for Cam's traditionally uncontested seat who will then let them run amok in the name of profit. The sacrificial lamb—who will be padded with anonymous, unlimited cash to resemble a lion—is Zach Galifianakis' Marty Huggins, a sad-sack civic booster going through the world with the mustache of a Zapatista and the light-footed walk of a male ballerina.

What makes the film farce is, of course, not just the R-rated jokes about sex and racism and adultery and bathrooms, but also its flat declaration that the realities of campaign finance are a tragedy. Honed and hustled by black-clad political operative Tim Watley (Dylan McDermott, funnier than his good looks usually allow), Brady's transformed from a lapdog into a cash-fed killing machine. But will his cash be enough when Cam strikes back?

There's plenty of crazy over-the-top comedy in The Campaign—or, rather, I am so simple that the sight of Will Ferrell and a bird of prey is hilarious—but wipe off the slapstick, and the film's mean and honest. There's a great bit about the old 'heritage' vs. 'racism' debate that gets huge laughs with precisely how stupid, and how smart, the bone-headed jingoism really is. Both Cam and Wayne get to give hilarious variations on the traditional "I approve this message" language of political ads, each of which pays off with real punchlines.

Roach's direction is also at a nice halfway point between the semi-factual drama of his HBO efforts and the broader flailing of the Powers series—nothing goes too off the rails, but odd touches jazz the film's sleek and cynical 85-minute running time. The script is credited to Shawn Harwell and his collaborator Chris Henchy, and if it stays in familiar keys for both Ferrell and Galifianakis, it also lets them play impressive solos within its tune. And take note: Henchy also co-wrote the similarly broad-yet-pointed The Other Guys with Campaign producer Adam McKay, which didn't just mock cop-movie clichés—it mocked even the idea of street-level police in an era of systemic corporate crime and fraud.

The Campaign is being sold as wide and loose—which it is—but I hope audiences enjoy its cutting edges. If McKay wants to try and direct interesting, money-making political comedies -- and the $171-million worldwide take of The Other Guys suggests he can— then more power to him.

It should be noted that The Campaign depicts both Democrats and Republicans as greedy, and goes further to say that greed and power make "sides" irrelevant. If the film has any position, it's that huge amounts of anonymous money given by shadowy manipulators to any, either, or both parties are bad for democracy. (If "The Campaign" is ever called "Class Warfare," that's when you'll know it's hit a nerve.) Any resemblance between the film's Motch brothers and the real-life PAC-money kingpin Kotch brothers is, of course, completely intentional. (With the sad addenda that real life never ends as cleanly as do our comedies.) The great thing about The Campaign, is that it's weird and strange and surreal and passionate and dirty, a crazy-smart comedy where you laugh until it hurts—in no small part because a lot of it should.