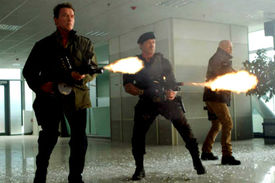 Chuck Norris has counted to infinity—twice. He also counted up the number of f-bombs in the script for The Expendables 2 and said he wouldn't be in it unless the R-rated flick was toned down to a PG-13. Sylvester Stallone conceded. Action fans mourned. Then Sylvester Stallone reneged. Hurrah! The Expendables 2 is bathed in bright red CGI blood and burns up its quota of cussing in the first five minutes. And not only does Chuck Norris still appear, he tells a Chuck Norris joke about himself. Like Fast Five, this over-the-top sequel caters to the lowest common denominator in the best possible way, and it's so fully committed to brainless bombast that it muscles audiences to applaud by sheer force of will. Expect the box office to be even more pumped up than the original.

In the dog-kill-dog world of The Expendables, men are divided up into the good, the bad, and the catalysts. (The weak are left out entirely.) On the side of the good, we have Stallone, Jason Statham, Terry Crews, Liam Hemsworth, Jet Li, Randy Couture and Dolph Lundgren. Fighting for the bad are British kickboxer Scott Adkins and Jean-Claude Van Damme, who at 51 has developed the body of a greyhound, oddly slender yet rippled with muscles where it counts. As for the catalysts, enter Arnold Schwarzenegger and Bruce Willis, both tough old lions who are content to have the even tougher and older Stallone go to war on their behalf. They have larger roles than before in a film that's just larger everywhere: the biceps, the battles, and even the sense of scale. And yes, Bruce, Arnold and Sly do wedge their egos into one frame and form a wall of machine gun fire, flames shooting from their weapons as though they're trying to broil a burger at Planet Hollywood.

A curiosity of the first film was that Stallone seemed embarrassed by his own concept. He's an actor and director who's long been in combat with himself—Action Stallone versus Academy Award Stallone—and he couldn't keep himself from injecting tragedy and pathos into the original Expendables, lumbering around the screen like the King Lear of Kicking Ass. There's no world weariness here. Having ceded directorial control to Simon West, he's free to have fun. Now when Stallone says, "I'm too old for this s--t," it's a humble brag. He and the dudes have stopped attempting to bond over their emotional scars. This sequel simply lets them pound beers and crack jokes about Statham's skeezer girlfriend, and the screen practically stinks of Old Spice and sweat. And like the muscular male Spice Girls, everyone's got their own niche from Crews the cut-up to Couture the airhead to Lundgren's crazy creepiness. Dolph's no actor (hell, no one here is by any definition of the word besides Bruce Willis) but he succeeds in convincing us that he, the world's most genetically perfect human being—a handsome 6'5" Fulbright scholar—is a goon. And nobody—especially not Ah-nold—is above rehashing their favorite one-liners, even if they're now as tinny as a can of ham.

As for the fight scenes, they're glorious nonsense, a guns-blazing bullet barrage where a shot to the shoulder instantly kills the enemy while our heroes run safe and fancy free. I tried to tally the body count of the minions, but ran out of fingers and toes just minutes into the first battle royale. An Expendable is expended in the first 30 minutes as pretense that the stakes are real, but the more convincing reason to invest in their brawls is that Van Damme's evil plan centers around a mine where he works slaves to death as mercilessly as Buchenwald. Normal mortals can't survive even one '80s legend. Luckily for them—and us—we've got a half-dozen more fighting the good fight for our cheerful, mindless amusement.