close
Lost at sea—and on land 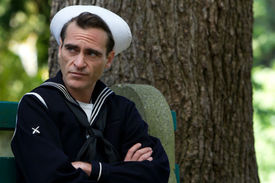 The grandiose score heaves when we meet seaman Freddie Sutton (Joaquin Phoenix), languishing on a boat just as WWII ends. He's a shell-shocked sailor in the days before PTSD, and the first thing we hear out of him is a disturbed cautionary "cure" for crabs that could also cure fertility. He's a kid, and what we later hear about his family gives us reason to think he entered service to straighten up. Instead he got head-sick and discharged. The Master comes to our increasingly digital environment on the cusp of projected film's obsolescence. As a result, it—like Freddie—grapples with irrelevance and churns with both aggression and loyalty. Director Paul Thomas Anderson is doing single screenings in 70mm, in different cities around the country prior to its premieres in Venice and the Toronto Film Festival and its September 21st release date. The events will generate plenty of positive energy for this prestige picture that owes much to Anderson's last film, 2007's There Will Be Blood, but yet The Master won't likely surpass the audience of his earlier masterstroke.

Like the sweeping story of Daniel Plainview, Daniel Day-Lewis' Oscar-winning role, here we have the sweeping story of Freddie. After a few years making moonshine and running from mistakes, Freddie stows away on a boat and meets Lancaster Dodds, a.k.a. The Master (Philip Seymour Hoffman), a Scientology-styled mystic/guru who's written a book and assembled a small but loyal following. From then on, a symbiotic relationship develops between Lancaster, Freddie and the audience. And while Freddie was quick to deny a crying jag to the superior officer who first tried to psychologically evaluate the damaged vet, The Master asks Freddie a series of invasive questions that he begins to unspool, and the film reaches "its most inherent state of perfect." In one shot that will doubtless be excerpted in the Oscars next spring, Phoenix rattles off Freddie's past—everything from the mundane to the torturous—while the audience holds its breath. It's in the moments when these two actors fight, laugh, commune or defy each other that the film is most vital and out of control. While Lancaster's basically bunk semi-religion demands rigid dedication from its members, the dynamic between the worldly mystic and the erratic drifter is at once illogical, threatening and irrefutable, a product of an indistinct but unquenchable need. Their bond is the film's biggest mystery, greater than faith or charisma. Spirituality is complex, but Bro Code is forever—even if it makes no sense at all.

Freddie drinks like a desperate Betty Ford, even mixing paint thinner and cologne into cocktails Master refers to as "potions." These drinks look like Master's reason for keeping Freddie around, until Freddie demonstrates his gift for violent loyalty. His volatility makes him valuable to Master's teachings because he's the "animal" from which man must to evolve to be in control, and so Freddie undergoes therapeutic training to learn that self-discipline. Meanwhile, Master is married to a woman (Amy Adams) who offers him counsel that would befit lady Macbeth. In private, she's in command, directing him from the wings and betraying the softness of her appearance with a judgment that's absolute and unyielding. And she isn't shy about wielding her power.

The ideology engineered by Master and his wife is loaded with the kind of old school B.S. that, said with conviction, passes for wisdom. When Lancaster brings a few people out to the desert to play a game with his new motorcycle, there is no goal or prize-but there is a point, and if you can't figure it out, it proves we're not as in touch with ourselves (or our past lives) as we think we are. His religion is full of holes and neither Lancaster nor his wife has the skill to survive a rational debate on their beliefs. But that's par for the course—what Anderson is continuing to excavate here is a fear that behind every great man is a totally faulty reason for being: Dirk Diggler's fame proves he's talentless, Daniel Plainfield's millions built him a void, and Frank T.J. Mackey's congregation echoes his inability to love or be loved. Anderson's powerful men are always building cruelty and futility, and their reward is loneliness.

The Master is big screen marvel intended for 70mm projection (a rare treat), with some beautiful imagery, but often inaudible dialogue. Phoenix's lived-in mumble comes off about as clear as Fenster from The Usual Suspects and Amy Adam's precise diction can't even save her harshest talking points. It's something to forgive while you go on, needily latching to every incident and conflict, as the manic-depressive male characters oscillate between violence and comedy.

One scene in particular echoes the bluster and vacuity of There Will Be Blood's bowling alley/milkshake scene. Freddie and Lancaster meet in the oppressive empty space of Lancaster's office. Freddie is aged and skeletal, and he's rebuked almost biblically. Like the opening, he's again lost at sea. A drowning man will cling to anything that might bring him to safety, but I can't help thinking Anderson just wants to make us feel small in his dark, choppy waters.