close
There's potential to this picture, even if the initial box office reaction is, well, terrible

The Oogieloves in The BIG Balloon Adventure 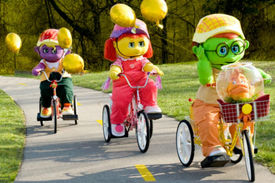 Spoiler Alert: They find the balloons

Gobie, Zoozie and Toofie got five magic balloons for their friend's birthday party but they floated away. While birthday friend Schloofy naps, they race to recover the balloons, each trapped in one or another wacky situation. Before you say, "That sounds like the plot of a Nick Jr. show," you should know that's the goal. This 88-minute pre-Kinder show is like nothing else in theaters. Sure, you can scold it for lacking the arty edge of Pixar or the snide cultural references of Dreamworks, but this film is made for kids around preschool age and once you realize the size of that demographic and the fact it's pretty much marginalized at the multiplex, you'll see the potential of this picture, even if the initial box office reaction is, well, terrible. The song and dance interaction of kids hollering advice during Blue's Clues happens here on the big screen, which is meant to transform the movie into a social event of sorts—even parents who hate dancing won't be too icy in the face of their exuberant 3-year-old, tearing up the floor to songs sung by a vacuum cleaner or, more perplexingly, Chazz Palminteri.

The Oogieloves have a vacuum cleaner friend named J. Edgar (get it?) who speaks to them via a cell phone made of an orange juice carton. Just like in the real world, J. Edgar has all the dirt, so he feeds them info about the location of the missing balloons sending the Oogieloves off into the work to meet B-list actors and make friends. Cloris Leachman is a polka dot-decorated homeowner with a balloon in her tree. Chaz Palminteri runs a '50s diner that can turn anything into a milkshake. Toni Braxston sings a song about being a rose-scented diva on world tour and (most convincingly) Jaime Pressly and Christopher Lloyd govern a sombrero that's fueled by flamenco. And though he's basically unrecognizable, even mom-aged women like me who had big crushes on Cary Elwes back when we were kids are able to handle seeing him as a bow-legged cowboy bubble vendor. (Hey, as even Oogieloves fans will someday learn, growing up is a hard thing to stomach.)

The story frames the loss and recovery of five gold balloons into five set pieces with songs and dance, and many smaller repeated songs peppered throughout. The set pieces are opportunities for the kids to rock their bodies while the repeated small songs have karaoke styled line readings to follow along, but their repetition is frequent and the songs simple, so at least one of them is bound to be the soundtrack to your drive home from the theater.

The makers describe their movie as "Rocky Horror meets Pee Wee's Playhouse"—Oogielove interactivity mimics the cult feature and the oddball talking puppets mimic the show—but under the strong market strategy, what The Oogieloves really provides is a way to play with your kids in public that's joyous and jubilant and adorable and potentially social. Maybe this wasn't the best first entry into the preschool model, but if this format takes off, we'll soon see the kiddie-Dark Knight of ticket sales.

Tags: The Oogieloves in the BIG Balloon Adventure
Print