close
Just when you thought it was safe to go to the yard sale... 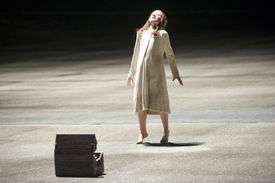 In The Possession, a vegetarian pre-teen and her older sister fall on a yard sale full of retro arcana and buy oddly ornate box that contains a demon. Whoops. Their father (Jeffrey Dean Morgan), himself distracted by a messy divorce, lumps it with the dishes like just another thread in the daily fabric. Cue disaster. Those Catholic exorcism movies with their dentistry-like ritual instruments and obsession with the approval of the church are cathartic, but they don't see possessions as a violation of personal space. (Though if your body is your temple, "home invasion" is a tidy way to describe it.) With an incredible performance by young Natasha Calls and surprisingly effect direction by Ole Bornedal (Nightwatch) you'll be surprised how this horror gets you just when you think you're safe. Box office will have to rely on word of mouth, as press and adverts aren't all that expansive.

Clyde (Morgan) isn't the most attentive father, but outside of being a workaholic, the reasons behind his split with Stephanie (Kyra Sedgwick) aren't explained. That said, the tiny troubles that come up between the girls on Dad's weekends with them all seem like natural outcroppings of the strain of divorce. Em's odd behavior and the dark circles around her eyes must be attributable to their split, and they hold onto that refrain until Clyde brings the box into a cynical professor who reduces a complex facet of Jewish mysticism into the phrase: "dislocated soul." So Clyde hits the Jewish community, which disperses from the streets upon his arrival, to find the original hip-hop Hasid, Matisyahu (adorable) singing on the subway steps. Hey, who better to give advice? And when Matisyahu says something to the effect of "Everybody put your hands..." you'll remember his jams, which is okay—it doesn't take you too much out of the movie.

We have 101 grown-up dramas and thrillers about the banality of evil, but while the evil in this bit of home decor isn't banal, it's intriguingly mundane. This demon seeks innocence, which is extra valuable here because of these parents struggling to protect their kids. True, the editing and the sound effects are often to blame for the feeling that you're growing increasingly sensitive to the scares onscreen, but there's something oddly sweet at the center of this scary movie, and it's more than just Matisyahu.