close
Nothing worth pondering—or recalling 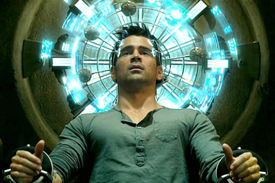 Despite drawing from the genius of visionary author Philip K. Dick and the fun of Paul Verhoeven's original Total Recall, director Len Wiseman's remake is both slicked-up and dumbed-down. Working from a script by Kurt Wimmer and Mark Bomback, Total Recall jettisons the most recognizable element of its source material—a trip to Mars—in favor of setting its confused hero in an earthly future dystopia. Wiseman's Total Recall stars Colin Farrell as Douglas Quaid, a bored factory man who procures the services of a company that promises to implant him with memories of an exciting life he hasn't lived—too bad for them that their innocent procedure appears to wake Quaid up to exciting memories of a life that he has lived, and a dangerous one at that. A hot cast, vividly imagined futurescape, and exciting action sequences will appeal to a wide range of moviegoers looking for a punchy late summer blockbuster, but hardcore genre fans will likely be quite disappointed to find a film that trades vision and originality for something best described as bland and inoffensive.

There's a reason why this film is called Total Recall instead of hearkening back to Philip K. Dick's original title, We Can Remember It For You Wholesale, which inspired the 1990 flick. It's really a take on Verhoeven's take of Dick's story, which makes it a spin-off twice-removed. Yet, unlike in both versions that came before, this new Douglas Quaid stays stuck on Earth for his adventures of the mind and otherwise. For those familiar with both the short story and the first film, Wimmer and Bomback's choice to erase Mars completely is bizarre. Dick's story centers on a man driven mad with his desire to visit Mars—his Douglas Quail was an everyman with a boring job and a dismissive wife who longed for a new and special life. While Wimmer and Bomback try their damnedest to add that angst to their Doug Quaid (like in Verhoeven's film, his last name has been changed), the development is both too short and too implausible, making the film turn to commonplace action and thrills to compensate for its lack of emotional intelligence.

The film opens (appropriately enough) with a dream sequence that features Farrell's Quaid on the run from some shady and technologically advanced police types who are desperate to capture both him and his lovely companion, a gutsy and spunky Melina (Jessica Biel). Jarred awake, Quaid finds himself back in his "real world"—safe in bed with lovely wife Lori (Kate Beckinsale), but trapped in a future dystopia so bent on dividing the rich from the poor that there's literally an entire planet between them. The film's meandering first act tries to set Quaid up as an unsatisfied cog in a very modern world, but that's hard to buy both emotionally level (his wife is gorgeous, loving, and smart, and his anger at being passed over for a promotion feels rootless) and technically (Wiseman apparently spent too much time watching J.J. Abrams' Star Trek in preparation—the film's first 20 minutes are saturated with pointless lens flares).

Things pick up when Quaid finally visits the shady company Rekall to undergo a cerebral implantation procedure that would fill his brain with memories of being a super spy. Of course Quaid's bright idea comes with a hitch—Rekall can't implant memories that are real, so imagine everyone's surprise when they discover that Quaid's dreams of being a spy end up not being dreams at all. Suddenly on the run and wanted by both the big government that rules the United Federation of Britain and the underground resistance that's bent on usurping the UFB's power, Quaid is forced to unravel the dangerous mystery of who he actually is and what he actually remembers.

Yet, while the dichotomy of what Quaid "knows" and what he "remembers" should form a massive, plot-driving conflict, Total Recall never fully commits to exploring those issues. However, what Wiseman does succeed at is creating an inventive and engaging world. His post-apocalyptic vision is clear and consuming, and, lens flares aside, it looks and feels both tangible and possible. Once the audience comes to understand the state of the world in Total Recall, they'll likely barely even miss Mars. Paired with some well-directed and choreographed action sequences, Total Recall works well enough as popcorn entertainment. But it's a diversion that doesn't do its source justice.

The film's performances are perfectly acceptable—Farrell has the potential to turn into a believable action star, and both Beckinsale and Biel eventually grow into their roles, despite some rough patches in the film's first half. Beckinsale, in particular, apes her Underworld performances for too long, before finally allowing Lori to exist as a her own character. Total Recall also features a very talented supporting cast including Bryan Cranston, Bill Nighy, and Bookem Woodbine that are vastly underutilized in their various roles. Cranston's role as Cohaagen is meant to serve as the film's principle villain, but even his talent can't rise above a thinly written baddie role that merely grasps at profundity.

Packed with an attractive cast and lots of big action scenes, the film is totally suitable as a summer blockbuster, but it's also totally forgettable. It will leave the audience's head the moment it steps out of the theater, a classic Philip K. Dick story distilled down to nothing worth pondering—or recalling.