close
You know you wanna watch 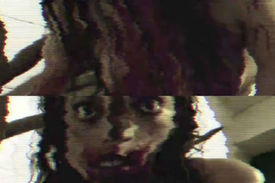 Men are bastards, women are beasts and heroes are doomed in this found footage/first person shooter omnibus. A framing story sends a team of bandits into a house for a VHS tape, but the house contains a dead man, broken lights and multiple stacks of unmarked VHS tapes. For reasons that are only partially rational, the team searches the house and the guy delegated to watch what's in the machine starts popping in tapes from the TV room floor. Here the vignettes start, each made more interesting because of the different recording devices they're on. The stories go from the domestic (a couple are haunted via Skype) to the fantastic (a spy-cam sex tape captures a succubus) to the backwater (a farm-style exorcism intruded on by a nanny cam). Every savvy twist provides a good reveal and a solid indictment of, well, manhood. From near rape to public molestation and general grossness, the guys in V/H/S make us want them dead. In one, a second honeymoon (starring segment director Joe Swanberg and, my favorite, Sophia Takal) plays up its nonchalant holiday videography best when the husband in the couple is casually selfish and disrespectful. In another, when a long distance couple videochats, the haunted girl begs the guy to record their conversations and he goes from disbelieving to annoyed she's requiring anything from him—meanwhile the ghosts are the in the hall and she's under attach. Making the villains both human and spectral is a sly maneuver by cunning scriptwriter Simon Barrett, whose horror comedy You're Next is a biting indictment of how wrong it is to enjoy watching the bad guy get bagged. But what we're watching isn't a chamber play about our grisly wishes; it's a short festival of snuff films, which nags at the moral problem exploited for kicks and giggles by all horror films. Though other found footage films drop the camera when the killing happens (thus obscuring the actual death) this one often shows the kill. The urban lore surrounding snuff is that it's a death captured for pleasure. But here, the clips show death and injury and their evil imbues them with some kind of power-as if their content transforms the tape into its own little moral vacuums. Sure it's fun—and painful—but it's not thin. This is one heinous path traveled without blinders, even if the frame can deliberately hide us from our own worst vices.