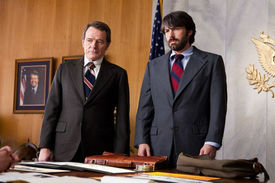 If there was any doubt Ben Affleck has turned into an exceptional director, his wildly entertaining, pulse-pounding thriller Argo will handily erase those thoughts. The incredibly true story of a CIA operative who hatches a plan to create a fake Hollywood movie in order to smuggle six American hostages out of Tehran during the 444-day Iranian crisis in 1979 will not only be a strong commercial success for Warner Bros, but also a solid contender on the awards circuit. This certain Best Picture contender proves to be a prime example of accomplished major studio filmmaking, and also a smart, crafty suspense-laden picture that should win critical plaudits across the board. Director/co-producer and star Affleck, a man of wide-ranging ability and talent, has fashioned a box office winner that should play right through to the end of 2012 and beyond with top returns for exhibitors.

Falling under the "It sounds too far-fetched to be true" rule of Hollywood filmmaking, Argo sets its story around a previously classified CIA mission that was designed to sneak home six American embassy workers who avoided capture by secretly holing up at the residence of the Canadian Ambassador. With no good options to get them out of Iran, the CIA's Tony Mendez (Affleck) hatches a scheme to create a fake movie production in order to pass the six off as filmmakers working on a new science fiction flick shooting in the country. Mendez enlists the help and expertise of Oscar-winning make-up artist John Chambers (John Goodman) who in turn brings in a Rolls Royce-driving Hollywood producer named Lester Siegel (Alan Arkin) who makes a deal to acquire a real Star Wars-style ripoff called "Argo," even going to the extreme of announcing the project in a Variety ad and article. "If I am going to be making a fake movie, I want to have a fake hit," says Lester, played to amusing perfection by Arkin.

Scenes creating the Argo-within-Argo are played for laughs, but the tone noticeably (and effortlessly) shifts once the action shifts to Tehran and the plan is put into motion. The six hostages undergoing strict training sessions led by Mendez in order to come off believably as Hollywood filmmakers—they've got to if they want to slip past the determined Iranian officials who want to prevent any Americans from leaving the country. As the bulk of the other hostages spent 444 days in captivity, the stakes are all too real. Though this section is clearly inspired by the true events, dramatic liberties have been taken as the nail-biting escape likely has more in common with Hollywood dramatic thriller conventions than the pace of actual events. Still, right from the opening credits Affleck (working from Chris Terrio's aces screenplay) gets it all right and strives to set the story almost like a documentary, complete with a recently recorded audio interview with former President Jimmy Carter which is played over the end credits explaining why the mission had to remain top secret for 16 years until the whole story was finally declassified by President Bill Clinton.

Affleck plays Mendez with just the right amount of authority, and has cast his film with a top notch ensemble including fine turns by Arkin, Goodman and a terrific Bryan Cranston as his CIA superior. Everything is first rate including spot-on production and costume design and excellent cinematography from Rodrigo Prieto. No question: the movie-within-the-movie is fake, but the resulting picture is the real deal.