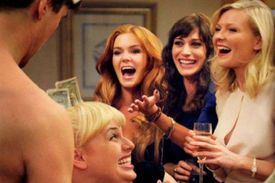 A strong cast is undone by strident shenanigans in Bachelorette, a girls-gone-wild saga cast in a Bridesmaids mold. For a time, Leslye Headland's adaptation of her stage play thrives on the profanity and vulgarity that defines the misadventures of Regan (Kristen Dunst), Gena (Lizzy Caplan) and Katie (Isla Fisher) on the bachelorette party night before they stand as bridesmaids for heavyset high school friend Becky (Rebel Wilson). Their odyssey involves strippers, cocaine, blood, vomit and other bodily fluids, not to mention matrimonial crises and races-against-time that keep the pace consistently wired, with the script's whiplash narrative embellished by repartee that strives for maximum dirtiness. The result is an initial comedic buzz, but the further these women plunge into hot water—and are forced to confront their personal and professional hang-ups—the more the story turns screechy and obnoxious. Nonetheless, a trio of well-matched lead performances, complemented by capable supporting turns by James Marsden, Adam Scott and Kyle Bomheimer, keep the female-Hangover-ish material just engaging enough to offset the second half's dearth of laughs, and should ensure solid interest from younger viewers at the box office.

Becky's nuptials (to a handsome, successful saint, no less) send all three of Bachelorette's protagonists into a tailspin, with domineering ice-queen Regan jealous of being beaten to the altar, Gena panicked about seeing her ex Clyde (Scott) at the ceremony, and Katie frustrated that Becky doesn't want to indulge in their high school brand of narcotics-fueled revelry. Headland makes clear that these friends stick around the less attractive Becky to boost their own self-confidence, yet the film initially moves so fast that such concerns are less pressing than the ladies' very bad behavior, which begins with inappropriate rehearsal dinner speeches (Gena's concerns Becky's bulimia, Katie's is a blast of slurred gibberish) and builds to the girls accidentally ripping Becky's enormous wedding gown. That destructive mistake is the catalyst for a variety of mishaps peppered with lewd cursing, and talk of sexual techniques and '80s and '90s movies. Then there's a race around town that dovetails with the nocturnal activities of groomsmen Trevor (Marsden), an intellectual boor who fancies Regan, Clyde, whom Gena still hates for a years-earlier incident, and Joe (Bomheimer), a good guy who fancies Katie despite the fact that she only cares about whether he can get her marijuana.

The longer these hijinks go on, the more they rely on shrieking and screaming, with rapid-fire ranting and raving souring the in-your-face vibe. More frustrating, though, is that as Regan, Gena and Katie are forced to confront their failings, insecurities and wretched conduct, the film—following the template of countless similar frat-guy comedies—mistakenly attempts to make us like these ne'er-do-wells not just as amusing crazies, but also as relatable, flawed individuals commanding of empathy. That's asking too much from a tale that argues gagging one's self is both a shameful sin and a useful skill, and as such, the manic last third becomes a lumpy slog that's unsure of how to wring actual melodrama from these cartoon proceedings. Nonetheless, until it finally exhausts itself, Bachelorette drums up considerable goodwill thanks to its stars, with Fisher getting considerable mileage out of a dumb-bimbo routine, Dunst radiating imposing bitchiness, and Caplan and Scott rekindling the expertly modulated love-hate rapport they shared on Showtime's small-screen gem Party Down.