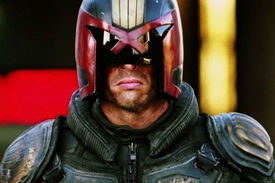 Combining this summer's two favorite blockbuster genres—that would be "comic book movies" and "remakes"—Pete Travis' Dredd 3D initially sounds like a bad punchline (especially since it happens to be opening in autumn), but the stylish sci-fi film makes some eye-popping and unexpected choices that add up to one heck of a fun film. Abandoning the plot of 1995's Sylvester Stallone vehicle Judge Dredd, Travis' film instead centers on the action-heavy travails of his new Judge Dredd (Karl Urban) and his maybe-protégé (Olivia Thirlby) as they battle the fierce drug dealer Ma-Ma (Lena Headey) while trapped in a massive apartment building that the overlord rules with an iron fist. Elevated by solid performances and clever effects work, Travis' film would have done big business a few months ago, but autumn audiences weary of its ilk might not turn out. It's a shame, though, because this could hopefully be the start of a fun and worthwhile new franchise.

Straight away, Dredd 3D quite firmly insists it's not a remake as it tackles a completely different storyline populated by completely different characters than Stallone's 17-year-old original. Whereas Judge Dredd was a crime flick focused on the Judge defending his own life, Dredd 3D is a shoot-em-up actioner that focuses on one terribly bad day in the life of the eponymous Judge. The plot is a mash-up of Training Day (a young recruit must prove their worth to a superior) and this year's blazing Indonesian martial arts epic, The Raid: Redemption (our heroes must escape a murderous apartment building). In short: this thing is built for action, and it mostly delivers.

The film doesn't waste any time establishing Urban's Dredd as a one-man judge/jury/executioner who does his job with the maximum of efficiency and the minimum of gray area. Dredd's more than good at his job, and he's better when he's working alone, so it's not easy for him to swallow a request that he evaluate a Judge recruit whose aptitude and scores already place her out of the running. But young Cassandra Anderson (Olivia Thirlby) has something special to recommend her, and the pair must work together at least for one day. Too bad it's this day.

Screenwriter Alex Garland is familiar to genre fans—he's penned such new classics as 28 Days Later and Sunshine, and he's even the one responsible for the latest draft of a new take on Logan's Run. Garland's work is distinguished by his concern for the humanity of his fantastic situations, no better exemplified than in his lovely adaptation of the grim sci-fi love triangle Never Let Me Go. Dredd 3D may not be as outwardly concerned with the nature of goodness and humanity as that film, but Garland has cleverly built in his own moral center to help guide and ground the film. As potential Judge Cassandra Anderson, Olivia Thirlby is tasked with a character who is legitimately more human than human—a "mutant" whose psychic abilities are nearly her only recommendation for being a Judge (and which serve both her and Dredd well within the confines of the film).

Set in a futuristic America that's been decimated by vaguely nuclear forces, the Judges are saddled with enforcing justice over a massive stretch of land—the vividly-imagined and underutilized Mega City 1, which stretches from New York to Boston—and even with their numbers, skills, and tools, they can only tackle but a fraction of the crime in their dirty, rotten city-state. Deferring to Anderson, Dredd lets her pick the crime to follow up, and her choice just so happens to be a gruesome triple homicide inside the 200-story tall mega-apartment complex, Peach Trees.

Unfortunately, Peach Trees is under the sway of the ruthless crime lord Ma-Ma (Lena Headey), who is none too happy that Dredd and Anderson are on her turf. The drug-running Ma-Ma has some other big problems, the least of which is that she's actually addicted to her own stuff. Her product, SLO-MO, is made for one purpose—to slow down the user's perception of time and sink them into a glittery, dazzling haze that makes everything look as if it's been coated in sunshine and sprinkles. Worked up on both drugs and her own ego, Ma-Ma locks down the building and tell the residents that it won't open until someone kills or brings in Dredd and Anderson. Let the games begin. Hint: they are incredibly violent games.

The violence in Dredd 3D is highly stylized, wildly over-the-top, and unthinkably gory. It's also incredibly hilarious, thanks to the obvious distance between reality and fantasy. Elevated by Urban's deadpan Dredd, Dredd 3D brings in just as many laughs as it does gasps. Reveling in its running, gunning, bombing, breaking, and busting, the film maintains a consistently strong tension for its first half, thanks to the sense that just about anything could happen—and probably pretty violently, too—but it limps along in its final third, mainly because for all of its brazen promises, nothing truly shocking does happen. Sure, it's distanced itself from the Stallone disaster, but ultimately, Dredd 3D doesn't dare to flip its own script.