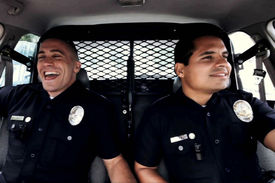 Unforgettable pair Jake Gyllenhaal and Michael Peña give Oscar-caliber performances as a couple of beat cops patrolling the dangerous streets of South Los Angeles in End Of Watch, easily one of the year's best films and one of the best ever in the well-worn cop genre. Although riddled with action, this film is most content when making the viewer ride shotgun in their patrol car witnessing the day to day interaction of these cops from their mellow mornings to their to EOW (end of watch). Fans of police dramas will gravitate but if queasier viewers can get behind some of the vivid violence, David Ayer's smartly written and directed film could cross over to upscale audiences looking for award-level entertainment. With top critical response, End Of Watch could turn into a mid-sized hit for Open Road that could even figure down the road in the Oscar race.

Director/writer David Ayer is best known for another L.A.-based cop tale, Training Day, which won Denzel Washington the Best Actor Academy Award. Here, he doesn't try to shake up the standard cop movie conventions, but still manages to create a wholly original piece of work by using a You Tube approach—Officer Brian Taylor (Gyllenhaal) is taking a film course as part of his pre-law studies and uses a camera to shoot his daily activities on the beat. Although this device might seem a little contrived it actually works, creating a 360 degree view that puts the audience right in the action. It's an enormously successful way of shooting and entirely appropriate here. Ayer, who really knows this subject inside and out, even weaves it into the storyline through Gyllenhaal's character, who knows his camera is illegal and risky—what if he's caught breaking the rules on tape?—but can't resist living on the edge. Unlike many films of this ilk, the gimmick actually helps End Of Watch achieve a unique urgency that keeps it fresh all the way through.

The film's real power though comes through the relationship between Taylor and his partner Officer Mike Zavala (Peña) and their almost-improvised dialogue. Ayer's penetrating script takes us deep into the heart and personal lives of a beat cop, making these two far, far richer than the Hollywood stereotypes. It also helps that their chemistry naturally adds a lot of humor and a surprising number of laughs, even though this is hardly a comedy. These are three-dimensional human beings, and we learn to care deeply about them—it's no wonder the LAPD offered such close cooperation to Ayer in the filming. Beyond this realistic look at what it takes to make it in this job, we really get to know these two and their hopes, dreams and loves. We also get to tag along as Taylor gets involved in a serious romance with Janet (Anna Kendrick) and as Zavala experiences the birth of his first child with wife Gabby (Natalie Martinez).

Along with these story lines, there's the everyday interaction with colleagues (the supporting cast is aces) and the increasing dangers as they chase gangs on the streets of South Central. The latter pulse-pounding sequences are naturally tense, but have the added level of our sincere investment in these characters. The emotional payoff is extraordinary, even more impressive in light of the documentary-style focus of the film. For a riveting motion picture experience with a unique perspective on these chosen few who serve and protect, this is the movie to see.