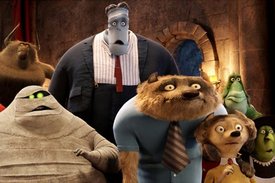 Anyone who watched Adam Sandler on Saturday Night Live during the '90s will know exactly how he sounds as Dracula: broadly accented, vaguely Jewish, heavy on the nasal outrage, prone to sudden shrieks. But Hotel Transylvania is aimed at children so young, they won't remember his TV days, and may manage to be as surprised by his voice as they are by this formulaic family flick, with a metaphorically defanged Dracula (who uses blood substitutes, since human blood is "too fattening") who struggles against his urge to overprotect daughter Mavis (Selena Gomez) from the hostile human world. No surprises or major laughs here, but as far as Sandler family fare goes, it's inoffensive enough. Commercial prospects are uncertain for this undistinguished time-killer.

Sandler's Dracula is still smarting from the 1895 death of his wife at the hands of an angry pitchfork-wielding mob. To ensure his daughter's safety, Dracula isolated his Hotel Transylvania in a haunted forest far from angry burghers, a safe resort for monsters of all sorts to vacation. This year is Mavis' 118th birthday, and Dracula's promised she can explore the human world. Safely. So he sets up a fake town populated by his zombie doormen dressed in "human" masks (they all look like Jason Voorhees on a drab day) to scare Mavis back into the hotel for good. But his overprotective instincts come to naught when backpacking human Jonathan (Andy Samberg) crashes the party, and winds up proving people just aren't that scary.

Dracula's predictably frantic attempts to hide the homo sapien while learning to let his daughter explore the world for herself make for standard family film lessons, albeit without the usual counter-balancing admonition that youngsters still need to respect the boundaries set by their parents. Sandler's scat-friendly humor makes cinema history with the fresh character of a sponge who glowers with pleasure as it soaks up urine, and he even sneaks in a shrinkage joke. The usual supporting players are in vocal attendance, with the best being Steve Buscemi as a hen-pecked wolf man married to a grating shrew (Fran Drescher, of course). The hotel staff includes Quasimodo (Jon Lovitz)—a hunchback who doesn't seem to qualify for traditional "monster" status, but when you're pillaging the Universal Pictures library for classic creatures, it's apparently best not to be too discriminating. In any case, Quasimodo's just an excuse to make jokes about squeaky-voiced, short, excitable Frenchmen. It's that kind of movie.

Dexter's Laboratory creator Genndy Tartakovsky's feature debut bears little trace of his distinctive visuals, hand-drawn credits aside. Most amusing are the severely caricatured faces of the monsters and animals—the Buscemi werewolf looks exactly right. Besides the letting-your-daughter-go message, there's a strong emphasis placed on the idea that True Love Comes Once A Lifetime: Dracula realizes that Mavis and Jonathan have a "zing," thereby once again promoting an insidious idea sure to warp thousands of young minds. Hearing Sandler rap about "the zing" at the end is intensely unpleasant, though it's not any worse than hearing LMFAO's "I'm Sexy And I Know It" mid-film for the umpteenth time.