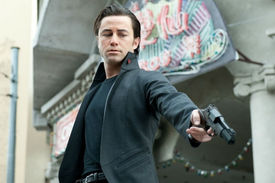 In 2044, Kansas looks like Detroit. Tent cities have taken hold under the highways, men are murdered for stealing a stereo, and one deceptively casual criminal overlord (Jeff Daniels) controls everything—particularly the Loopers, punctual assassins who cruise around this urban warzone in shiny sports cars, wearing their hair slicked-back like '50s French movie stars. Like all Loopers, Joe (Joseph Gordon-Levitt) has one job: at a specific time measured down to the second, he'll shoot a hooded man who appears literally out of the air. Or more literally, out of the year 2074. After all, the best way to get rid of a man is to time-travel him back three decades and blow off his head before he pisses you off. Then one day, Joe is ordered to kill the older version of himself (Bruce Willis)—consider it an assisted suicide. But the now-married, retired Joe is too smart to die easy, and so the hunt is on with Daniels' goons chasing Gordon-Levitt, who's chasing Willis, who's chasing his own deadly agenda. Director Rian Johnson's resulting film, a cornfield neo-noir, is the coolest, most-confident sci-fi flick since 2006's Children of Men. With its ambitions matching its ability and star clout, expect Looper to open modestly and keep running and running and running.

First, the facts: Joseph Gordon-Levitt and Bruce Willis don't look alike. But through the magic of make-up and acting, they do. Johnson has shied away from getting specific about Gordon-Levitt's three-hour prosthetic regimen, though it's clear his nose has been hooked and his eyefolds creased, plus the young actor has trained himself to knit his eyebrows together, gravel his voice, and purse his lips like he's fighting off a smirk. Sometimes he'll tilt his head just slightly and the spell breaks. But really, who cares. The two are twined together in a dual role that isn't dependant on cheap mimicry—Willis' version of Joe has, after all, lived twice the life of his would-be assassin—but instead thinks audaciously about what it would mean to live in the same moment as your future self: A fresh slice chopped from Gordon-Levitt's ear instantly means a cauterized scar on Willis' own. A young man bent on violence and for-the-moment thrills ("This job doesn't tend to attract the most forward thinking people," notes Joe) meets the killer his selfishness created. And an old man who's finally found love would kill the immature punk who vows he'll walk away from his future bride—except if he kills him, he'll never meet her at all.

These ideas about mistakes and mentorship become even more tangible when the two cross paths with a single mother (Emily Blunt, strong) and her son (Pierce Gagnon, great) and unthinkingly risk changing more futures then their own. The film flirts with Back to the Future-style visions of time travel—photos that fade, actions that ripple forward—but also suggests that, like the gun-toting Loopers, all of whom have agreed to kill themselves in their employee contracts, there is a circular order to fate that cannot be changed. And ominiously, Willis reports from the future that there's a new super boss coming who aims to kill everyone.

What's bold about Rian Johnson's briskly philosophical flick isn't just its use of time travel, the mechanics of which Willis refuses to explain, huffing, "We're gonna be here all day making diagrams with straws." And its visual effects are brashly low brow—the time machine looks and acts like a cage covered in a tarp. It's that Looper is so economical and cold, giving us a ruthless hero set on an even more ruthless quest. There isn't a single good guy in the film, only varying shades of cruel. And the value of a life literally has a price: four bars of silver. (Inflation renders cash useless, a detail left confidently unexplained.) Yet from these ingredients, Johnson builds toward a shatteringly emotional climax that asks, Would you sacrifice one man for yourself, yourself for the world, or the world for one man? That question forms a loop. And so does the future.